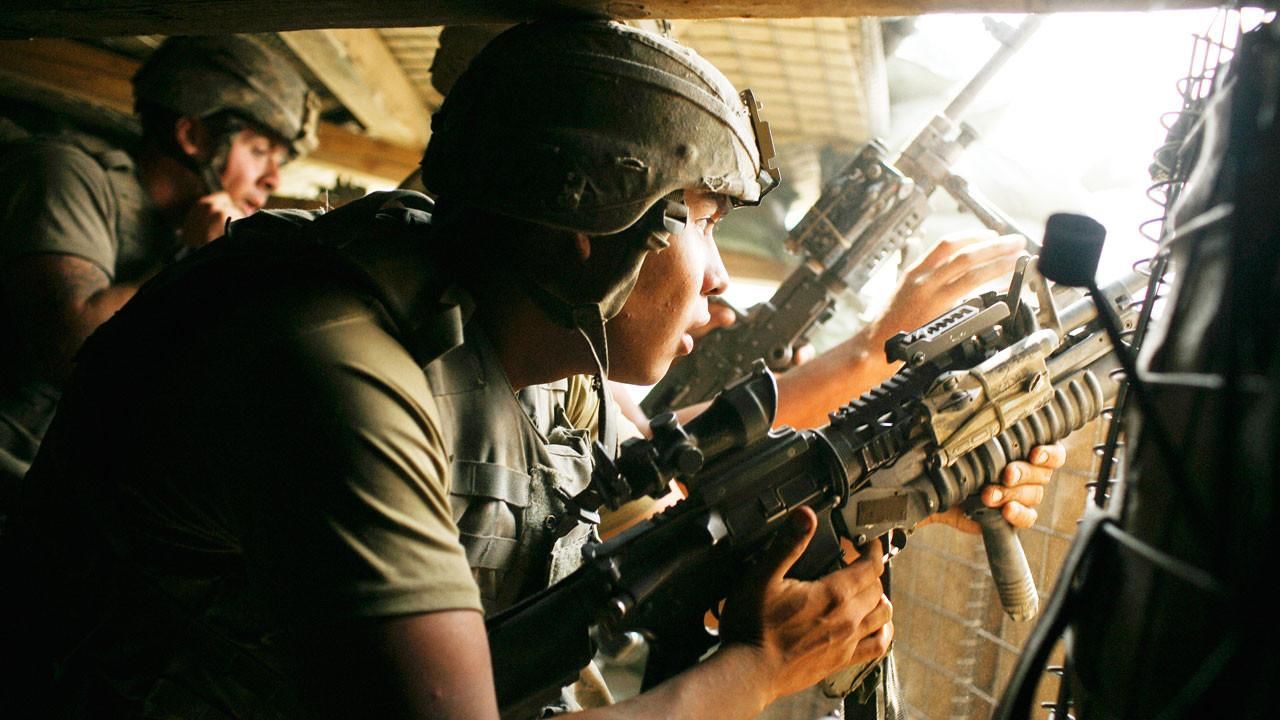 How did you come across this particular assignment – what brought you there? Why did it appeal to you?

Sebastian: We were there the first time on assignment for Vanity Fair and ABC News. After an embed with Battle Company in 2005, I’d had the idea of following one platoon for an entire deployment and both writing a book and making a documentary about their experience.

Sebastian: When I stepped off the helicopter in June 2007 I was stunned by the ruggedness of the terrain – and the beauty. Then again, I did not have to spend a year there, and I assumed the fighting would be minimal, which of course it was not.

What kind of advice/protection did the soldiers offer you while you were shooting? Did you receive any training/guidelines (for your safety) prior to shipping out?

Sebastian: They knew Tim and I had been in plenty of wars before this, so they didn’t really offer any advice. Once or twice during combat I was advised where good cover was (it depends on what direction they are shooting from).

Did you take turns with the camera?

Tim: We each had a camera and filmed more or less of our own volition. If I was busy taking stills, Sebastian would make sure to cover the camerawork. There were scenes where we were both shooting, and we would divide things up in a crude manner – I would take the wides, he would take the tights, or I would shoot the Afghans while he shot the Americans.

Tim: No limits at all on access; none. There was a stated agreement that we would not shoot wounded American soldiers – or would get their OK later – and I think there was an understanding that we would be very sensitive about filming the dead. The Army asks to review a rough cut later for security and privacy concerns, but they had no issues.

Did you stay the entire duration of their deployment?

Tim: No, we did five trips each, sometimes together, sometimes not. Each trip lasted around a month.

How much footage was shot versus what made it into the film? Did you ship footage back as you went along?

Sebastian: We shot 150 hours of footage, and we would bring our footage back on each trip and copy it and log it. We also shot around 40 hours of interviews at the soldiers’ base in Italy about three months after the deployment.

Who are these soldiers? Did you get any distinct impression of them, where they came from, why they were there? Any specific qualities that come to mind?

Tim: No one had followed a platoon for an entire duration of their deployment, so we became incredibly close to many of the soldiers. They came from a variety of backgrounds and had joined the Army for a myriad of competing reasons. Some said they needed to get out of their parents’ home and saw the Army as offering them independence, others that they were seeking a rite of passage and new experiences. Many did not think they had many options open to them and saw the Army as the best opportunity on offer. They came from all over the U.S. – many from Texas and California, others from faraway places like Guam.

What kind of dynamic did you have with your subjects?

Sebastian: Each trip the dynamic got more and more relaxed and comfortable. It became clear to the soldiers that we were not doing a political story and that we were comfortable in that environment – and that we were willing to take the same risks they were and endure the same discomforts. Tim broke his leg in combat; I ripped my Achilles tendon. Then I got blown up, but none of those things kept us from going back out there.

After being under fire for a sustained period, how would you describe the effect it has on you? Did you notice any change in the soldiers over the course of your time with them?

Sebastian: Both of us have been war reporters for some time now, so this was not our first experience being shot at. Being in a combat zone can be both exhilarating and terrifying, combined with long stretches of boredom. Things appear very simple in a war zone as the clutter of daily living recedes with the larger equation of being killed or staying alive. Mix this with being drip-fed adrenalin, and inevitably it is going to make “coming back” incredibly difficult. I think this is something that the soldiers experienced, and to a lesser extent we also.

In one scene, we see a soldier making small talk during serious acts of war. It is quite affecting and an interesting choice. Why did you choose to include it? Were there other moments like this that struck you?

Tim: There is a great emphasis in war reporting on capturing the actual “bangbang” fighting of war – and many reporters feel that any work would be incomplete without a sense of this “action.” We were no different, but because there was an incredible amount of fighting going on in the Korengal Valley, recording the actual firefights got quite boring. What was infinitely more interesting and revealing was how the soldiers carried on in these situations. People who have not experienced war inevitably base their understanding of it through the mediated versions of news or Hollywood. These representations are often limited and cannot quite reveal the humour, boredom and confusion inherent in combat. It is something we felt was important to represent.

Were there any dynamics of the platoon that you had not anticipated that you were especially glad to have captured?

Sebastian: I was unprepared for just how smart and dedicated the officers were, and many of the enlisted men as well. I was also amazed by how open and welcoming they were with us – the press. It was not what I had anticipated.

Any interactions with the village people/elders that did not make it into the film that you wish you could have included?

Tim: There were many, many scenes of all types that we were heartbroken not to include in the film. There were very funny moments in the shuras – the meetings with the elders – and also very intense moments when someone was very angry. There were several scenes of locals saying how much they hated the Taliban and gave up information on them, and other scenes where they clearly hated the Americans and wanted them to leave. All of it shows the complexity of this kind of war, but we could not put everything into the movie.

The film is very balanced and does not lead you, but rather just shows you how it is. Could you describe whether you had any guiding principles about how/what you shot as well as how you edited, how you shaped the film ultimately?

Sebastian: We were not interested in the political dimensions of the war, only soldiers’ experience, so we limited ourselves to the things soldiers had access to. We did not ask any generals why they were in the Korengal, for example, because soldiers do not have that opportunity, either. Our guiding principle was that we would only have people in the movie who were fighting in the Korengal. It was that principle that excluded Tim and me from the movie as well … and prevented us from using an outside narrator.

Tim: It was a conscious choice. We are journalists, and as such, we are not supposed to “lead” people to a certain opinion. That is called “advocacy,” and it certainly has its special place in the media world, but as journalists, it is not something we wanted to engage in.