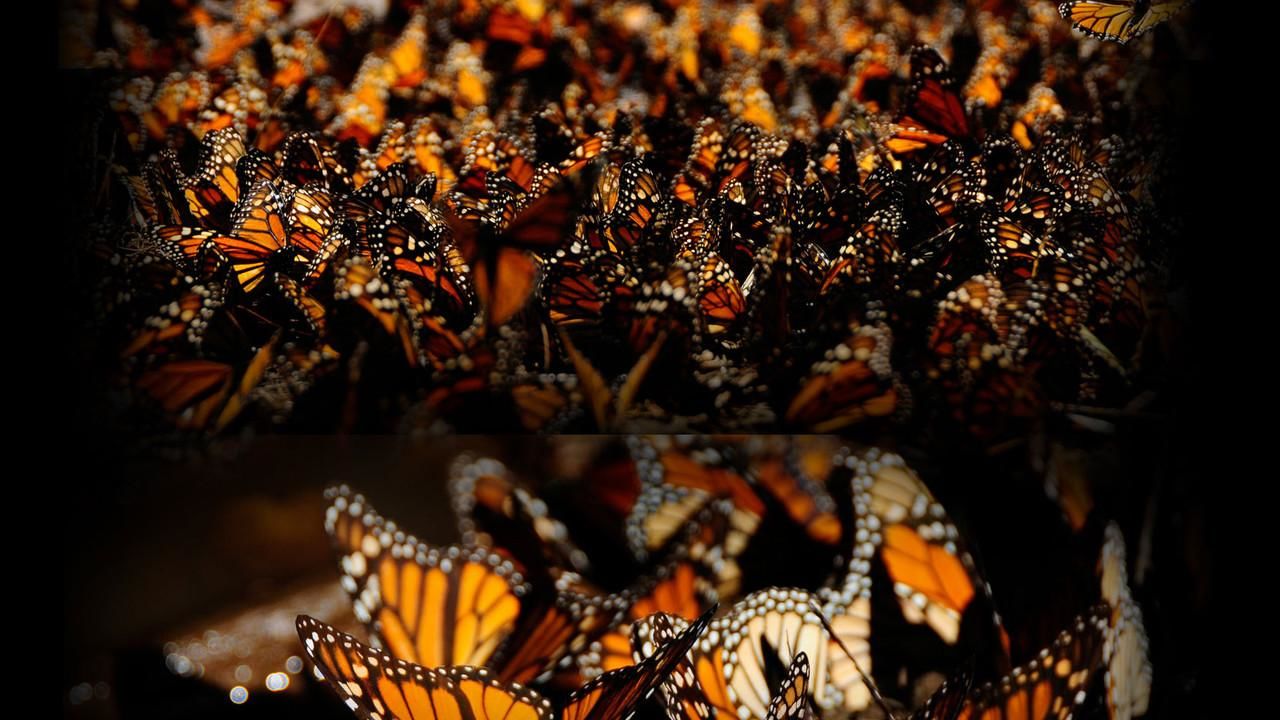 THE TALENT BEHIND GREAT MIGRATIONS

ANDY B. CASAGRANDE IV
Cameraman
A veteran field producer and cinematographer, Andy’s passion for wildlife, as well as his experience as a naturalist and documentary filmmaker, have taken him around the world to capture the lives and movements of some of the planet’s most fascinating creatures.  In addition to his outstanding academic achievements at California State University, Long Beach (biology/psychology), Andy has travelled the world in pursuit of exquisite cinematography and photography of king cobras in India, lions in Tanzania, baboons in South Africa and great white sharks.  For the Great Migrations series, Andy was instrumental in telling the compelling stories of zebras and the great white shark.  Andy is featured in the Behind the Scenes episode, where, while filming great white sharks, he bravely (and briefly) ventures outside the shooting cage to swim more freely in order to get better footage and suddenly realizes he’s surrounded by four sharks — not just the one he’s been filming!  We also follow Andy on a nearly month long quest to use new high-speed, slow-motion photography to film a mother cheetah stalking a zebra herd, preparing to feed her cubs.

MARTIN DOHRN
Cameraman
With nearly 25 years behind the lens, Martin Dohrn is an award-winning cameraman and producer.  In addition to his impressive roster of work on natural history programs, Martin has worked on feature films, music videos and commercials in his native U.K.  Nominated for both a BAFTA and an Emmy, Martin is in demand when it comes to specialty camera work.  For the Great Migrations series, Martin filmed the intricate movements of army ants in the Need to Breed episode, and was director of photography for the breathtaking monarch butterfly story in the Born to Move episode.

JOHN FRYXELL
Scientific Adviser
Dr. John Fryxell is professor of biology and zoology at the University of Guelph in Ontario, Canada.  As a mathematical ecologist, Dr. Fryxell focuses his research on the effects of behavioural decisions by terrestrial mammals on population dynamics and community structure.  With research underway on wildebeests and gazelles in Tanzania among others, he combines experimental data and model predictions with long-term observational data to interpret animal movement and behaviours.  Dr. Fryxell is seen in the Science of Great Migrations episode of the Great Migrations series, where he provides and studies mathematical models of wildebeest migration patterns in Tanzania.

SIR IAIN DOUGLAS-HAMILTON
Scientific Adviser
Founder of Save the Elephants in 1993, Sir Iain has been studying elephants’ movements and choices for more than 40 years.  Author of “Among the Elephants” and “Battle for the Elephants,” he is known worldwide for his dedication to the species, and has contributed to scientific research worldwide.  He earned both an M.A. and a Ph.D. in zoology from Oriel College in Oxford, England.  Sir Iain is featured in the Science of Great Migrations episode of Great Migrations, and the team is grateful for his contributions to the Feast or Famine episode, which featured the Mali elephant migration.

DAVID HAMLIN
Senior Producer, National Geographic Television
Emmy Award-winning producer David Hamlin brings decades of cross-continent, multiple-crew production management experience to Great Migrations, where he was responsible for all production and editorial oversight.  Having worked previously on the National Geographic Explorer series – for which he won an Emmy – David also produced Reptile Wild and other natural history and science specials and series for National Geographic Television, including Expedition Journal.  David began his career as a schoolteacher, then as a scriptwriter for “Sesame Street” while still in college at Dartmouth.

DERECK AND BEVERLY JOUBERT
National Geographic Explorers-in-Residence, Filmmakers, Conservationists
Acclaimed filmmakers Dereck and Beverly Joubert have collaborated on a number of groundbreaking wildlife films, several of which have aired as National Geographic programs.  Their credits for National Geographic include the Emmy Award-winning Eternal Enemies: Lions and Hyenas, Journey to the Forgotten River and Elephant, the popular Zebras: Patterns in the Grass, The Stolen River and The Long Night of the Lion.  Reflections on Elephants won two Primetime Emmy Awards for Outstanding Individual Achievement in Informational Programming for Writing and Sound Recording.  In 1985, the Jouberts established their own successful production company, Wildlife Films Botswana, in Kasane, Botswana, turning out films acclaimed for their unique style: stunning close-up photography and natural sound combined with a deep understanding of animal behaviour and animal/environment interactions.  More recent films include Relentless Enemies and the dramatic Emmy-Award winning film Eye of the Leopard, in which they follow a leopard cub from birth through the time she leaves her mother, more than three years.  Currently, the Jouberts spend most of their time in the bush, returning periodically to Kasane to gather supplies and to receive and send film and correspondence.  The Jouberts were instrumental in Great Migrations, telling the story of the zebra migration in the episode Race to Survive, for which they captured rare and unique footage of this stunning migration.

BOB POOLE
Cameraman
Bob Poole grew up in East Africa, where his father was the director of the Peace Corps, and later the director of the African Wildlife Foundation.  It was through his parents that Bob gained a lifelong appreciation of the natural world and developed an adventurous spirit, later pursuing an education and professional background in this arena.  In addition to his stunning still photography and cinematography on the ground, Bob became a specialist in aerial cinematography, designing and creating various aerial mounts for fixed-wing aircraft and helicopters.  Over the past 16 years, Bob has travelled the world as a director of photography, documenting science, nature and adventure films for National Geographic and other channels.  For the Great Migrations series, Bob followed the wildebeest across the Serengeti in Born to Move, got stunning footage of Mali elephants, and filmed the white-eared kob in Sudan in Need to Breed.  Bob is also featured in the Behind the Scenes episode of the series, where he experiences what he calls “the wildest thing I have ever seen in my life” — a nearly 100 kilometres per hour sandstorm perhaps over 30 metres high that turns the sky yellow, then red, then black, in the middle of the morning.  Bob ventures out into the middle of the sandstorm to capture some remarkable footage.

NEIL RETTIG
Cameraman
Emmy Award-winning cameraman Neil Rettig is a naturalist and filmmaker who began his career in the mid-1970s after attending the Chicago Academy of Fine Arts.  Over the past three decades, Neil has contributed to the production of hundreds of films, including IMAX productions, National Geographic specials and science documentaries.  Neil’s knowledge of raptors, especially the rare forest eagles, and his fieldwork have been instrumental in the conservation of rare and threatened animals, the establishment of protected ecosystems around the world and breeding projects for endangered species.  Neil’s innovative camera work in tropical rain forests, his ability to move the camera from forest floor to canopy and “film on the fly” made him an integral member of the Great Migrations team.  In addition to his technical and natural history prowess, Neil is acclaimed for his creative eye, artistic composition and his lightning-fast ability to capture the moment.  Neil dangled from a blind over the Mississippi in the Feast or Famine episode, was the director of photography for the Borneo tree canopy segments of the Race to Survive episode and shot amazing footage in the Falkland Islands for the Need to Breed episode of the series.

CHIP TAYLOR
Scientific Adviser
Orley R. “Chip” Taylor is founder and director of Monarch Watch, and is also a professor in the Department of Ecology and Evolutionary Biology at the University of Kansas in Lawrence.  Trained as an insect ecologist, Chip has published papers on species assemblages, hybridization, reproductive biology, population dynamics and plant demographics and pollination. From 1974 to 1992, he studied neotropical African honeybees (“killer bees”) in French Guiana, Venezuela and Mexico. In 1992, as the bee research was coming to an end, Taylor founded Monarch Watch, an outreach program focused on education, research and conservation related to monarch butterflies.  Over the past 18 years, Monarch Watch has enlisted the help of volunteers to tag monarchs during the fall migration.  This program has produced many new insights into the dynamics of the monarch migration.  Chip is featured in the Science of Great Migrations episode of the Great Migrations series, where he works with Martin Wikelski to tag and track the movements of the monarch butterfly.

MARTIN WIKELSKI
Scientific Consultant
Martin Wikelski is director of the Max Planck Institute for Ornithology and a professor at Konstanz University in Konstanz, Germany.  He is also a visiting lecturer at Princeton University, Department of Ecology and Evolutionary Biology.  A native of Germany, Martin received a master's degree from Ludwid-Maximilian University in Munich and a Ph.D. from the University of Bielefeld in Germany.  A delegate to the Charles Darwin Research Foundation, Martin has traveled to natural habitats on five continents and Pacific and Atlantic islands.  He is currently doing grant-funded research on the future of animal tracking technology and interactions in the tropical rain forest, as well as continental navigation of songbirds.  A lead scientific consultant for the entire Great Migrations series, Martin was also featured in the Science of Great Migrations episode, where he and Chip Taylor tag and track monarch butterflies with a device he created.

RORY WILSON
Scientific Consultant
Rory Wilson is currently chair of aquatic biology at the Institute for Environmental Sustainability, University of Wales Swansea in the UK.  He is an expert in foraging ecology, as well as the physiology and behaviour of a range of animal species (with particular emphasis on marine endotherms) via remote sensing and data-logging technology.  He is currently working on the ongoing development and deployment of the “Daily Diary” — a miniature device that has been attached to wild animals, including albatrosses, sharks, penguins, badgers and turtles — to record movement, behaviour, the energy costs of each behaviour and the environmental conditions to which the animals are exposed.  Wilson’s “Daily Diary” tagging device was used on elephant seals in the Science of Migrations episode, where he works with Dr. Flavio Quintana on tracking the underwater migratory habits of the elephant seal.  Dr. Wilson was also a lead scientific consultant for the entire Great Migrations series.