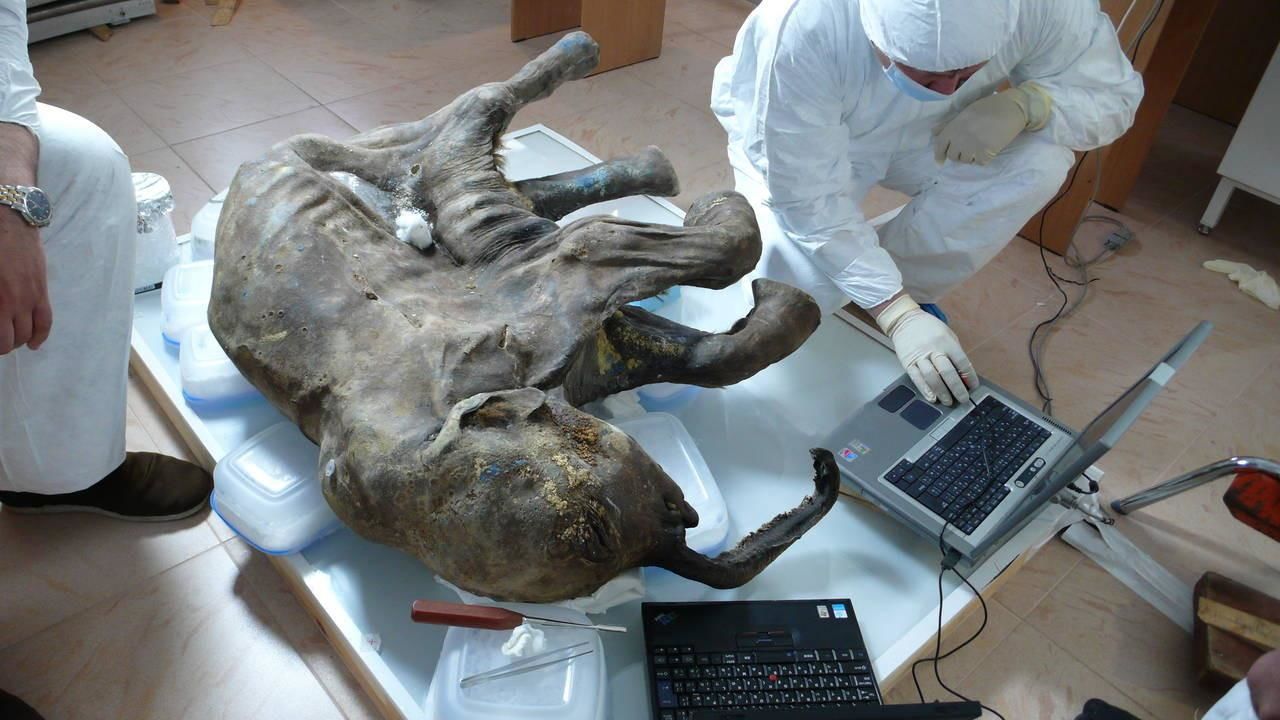 In May 2007, winter still blanketed the tundra as two of Yuri Khudy’s sons searched for wood along the banks of the frozen Yuribei River, when they saw what they thought was a sick or dying reindeer. As night fell, the boys rushed to their family’s tent to tell their father about their discovery.

The next day, Yuri took a look for himself. The animal was a little over a metre long and appeared to have no tusks. But from its face extended what could only be called a trunk. Yuri recognised that this was an unusually well-preserved baby mammoth, but he was reluctant to touch the carcass. Like many Nenets, Yuri is an animist who believes that every living thing has a soul, and disturbing the remains of a dead mammoth is said to bring misfortune.

At first, Yuri could not decide what to do. He visited a sacred site that has been in his family for generations to make an offering to the spirits, hoping they would look kindly on him and provide their protection and guidance.

The next day, Yuri boarded a helicopter in the closest village of Novyi Port and travelled to Yar-Salé — the region’s administrative centre — to ask for help from a trusted friend. Yuri believed the discovery of the baby mammoth might actually provide a windfall to the Nenets community, but he also felt that his people and their homeland should receive some kind of credit for this discovery.

Within a few days, the baby mammoth was transferred to the city of Salekhard and stored at the natural history and ethnography museum. As a gesture of thanks and recognition to Yuri, Salekhard Museum officials named the baby mammoth after Yuri’s wife, Lyuba, which means “love” in Russian.

The first to examine Lyuba were French arctic explorer Bernard Buigues, Russian palaeontologist Alexei Tikhonov of the Zoological Institute of the Russian Academy of Sciences in Saint Petersburg, and Dan Fisher of the University of Michigan in the U.S. Buigues, Tikhonov and Fisher conducted the initial review of X-rays and examined Lyuba’s exterior body. From these initial exams, they determined that both milk tusks were present and had completed their growth, suggesting a probable age of just a few months at the time of death.

Range: Global
Mammoth fossils have been discovered on every continent except Australia, South America and Antarctica.

Appearance: Similar to modern elephants
The woolly mammoth stood about as tall as an Asian elephant. Its skull was also narrower than that of modern elephants; in addition, its ears were smaller and its tail shorter, both of which were adaptations to extreme cold. Woolly mammoths had a full coat of fur consisting of long, coarse exterior hair and a short, dense layer underneath.

Longevity: 60 – 80 years
Mammoths usually died after their last set of teeth wore away, usually at around 60 to 80 years.
Diet: Herbivore
Mammoths consumed about 225 kilograms of plants, grasses, aquatic shrubs and trees daily. They used the tip of their sensitive trunks to pick and eat delicate buds, flowers and shorter grasses. Mammoths had four giant, shoe box-sized teeth — two upper and two lower. They grew six sets of teeth over a lifetime and typically died when their last set of teeth lost the ability to grind up vegetation.

Reproduction: Unknown
Based on observations of modern elephants, it is thought that female mammoths did not become sexually mature until they were about 15 years old and had a gestation period of 22 months, which produced a single calf. Their social structure was probably the same as that of African and Asian elephants, with females living in herds headed by a matriarch, and bulls leading solitary lives or forming loose groups once they reached sexual maturity.

Specialised adaptations: Tusks, thick skin, frost-resistant coats, short tails and small ears
Woolly mammoths probably used their tusks to brush away snow in search of food, to deter potential predators, and to attract mates. Mammoths had thick skin that secreted an oily substance that covered their long coats and insulated them from the cold. They also evolved smaller ears and shorter tails to conserve heat.

Predators: Large ice age carnivores; humans
Young or sick woolly mammoths were probably at risk from attacks by sabre-toothed cats and other large ice age predators. Humans migrated into woolly mammoth habitats about 40,000 years ago and began hunting them for their meat, bones and skin. It is still a matter of debate whether or not humans hunted the woolly mammoth to extinction.

WHY DID THE WOOLLY MAMMOTH DIE OUT?

Woolly mammoth’s roamed the Earth tens of thousands of years ago, leading lives similar – but colder - to modern-day elephants, of whom the Asian Elephant is the closest living descendant. The woolly mammoth was a commonly found animal during the last ice age, if the fossil record is to be believed. Mammoth fossils have been discovered on every continent except Australia and South America.
Mammoths were similar in size to elephants, but had adapted individual characteristics to live in the extreme cold weather of the ice age. Mammoths had narrower skulls, smaller ears and shorter tails and perhaps the most obvious difference between them and elephants was that woolly mammoths were covered in a full coat of hair.
Surviving in the cold, dry tundra of the ice age, woolly mammoths were well adapted to their environment, using their large tusks to brush away snow as they looked for food and secreting oil that covered their fur, insulating them further from the cold.
But then, 10,000 years or so ago their numbers began to dwindle before eventually becoming extinct 4,000 years ago. But what really led to the disappearance of these large herbivores from the planet? We take a look at the evidence and try to decipher what was the real cause of their demise.

Why Did the Woolly Mammoth Die Out? Reason Number One: Climate Change

Scientists have always been intrigued about what caused the extinction of the large mammals, or megafauna, which lived in the late Pleistocene Period. The Pleistocene Period started about 1.8 million years ago, but ended just 10,000 years ago with the last ice age.
It was around that time that mammoths, the sabre-toothed cat, ground sloths and Native American horses and camels all became less populous and eventually became extinct.
The popular reason often given for the demise of the Woolly Mammoth is that as the Earth began to heat up, the world’s climate became too much for the mammoths to handle, who had evolved to live in conditions of a colder globe.
Climate change has been held widely responsible for this loss, as these large mammals struggled to adapt to changing conditions and environments. Mammoths were herbivores so were very dependent on gaining all the nutrients they needed to survive from the plants that they ate – if climate change led to the dying out of some vital mineral-supplying plants, mammoths would suffer considerably.

Why Did the Woolly Mammoth Die Out? Reason Number Two: Humans

But while sudden changes to Earth’s climate may have played a part in the demise of the mammoth and other large mammals that roamed the Earth’s surface 10,000 or so years ago, scientists are increasingly beginning to argue that human influence was significant.
When the ice age ended and temperature and climate became more amenable, vast areas of the world became habitable by humans, who advanced northwards exploring new territories. As humans spread out they came into contact with woolly mammoths, which they hunted. Humans hunted mammoths for their meat, bones and skin. Some scientists believe that a poor habitat as a result of climate change, combined with increased contact and hunting by humans as they increasingly entered their areas of habitat led to their eventual extinction. The mammoth population was at such a low ebb by the time that they were hunted by humans some experts argue that even if every human on the planet at the time killed a mammoth once every three years, the woolly mammoth would have become extinct. So, while climate change dealt the mammoth a crippling blow, it may have been human hunters who landed the killer blow in sealing their fate as an extinct species.

Why Did the Woolly Mammoth Die Out? Reason Number Three: Meteorites or Comets

Research in 2007 revealed that the demise of the woolly mammoth, in North America at least, may have actually been caused by the sudden impact of a meteorite or comet hitting the Earth. Scientists from Brown University, in Rhode Island, USA, believe that they have found evidence of an asteroid hitting the Earth, which led to the extinction of large mammals, including the woolly mammoth in North America, as a result of massive climate change.
The scientists argue that a large asteroid or comets would have hit North America, leading to the melting of ice sheets, extreme wildfires and the whipping up of hurricane force winds, which in turn led to the extreme ‘big freeze’ cooling of what is referred to as the Younger Dryas Period. The Younger Dryas period took place an estimated 10,000 or so years ago, when the world was heating up from the last ice age. However, it was a short-lived (700 years) cold snap that had a massive effect on the climate of North America and Europe.