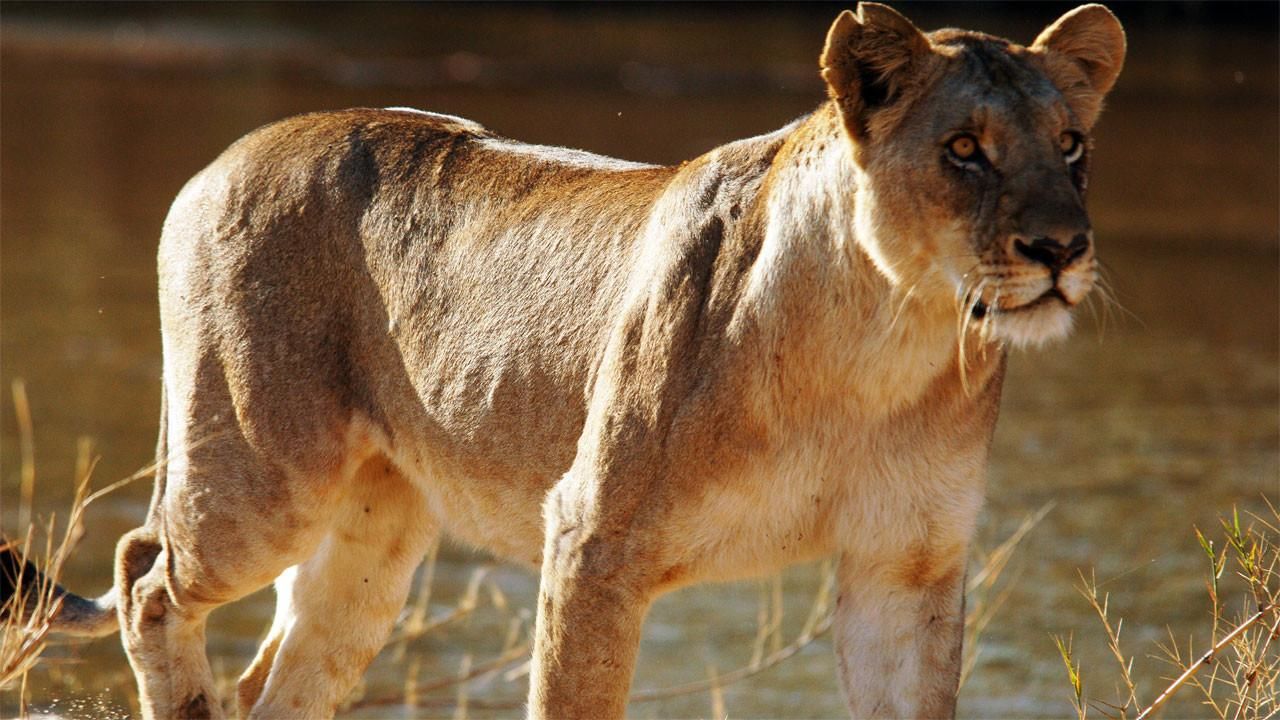 A giraffe can grow to a height of nearly six metres, run at almost 60 kilometres per hour and kill someone with one kick of its hoof.

A Bryde’s whale weighs up to 20 tons and can swim 25 kilometres per hour.

A grown chimpanzee is seven times stronger than the average man.

A lion’s roar can reach over 100 decibels – about as loud as a train horn or a plane’s engine at take off from about 300 metres away – and can be heard over eight kilometres away.

African wild dogs live in packs that are usually dominated by a monogamous, breeding pair.

Spotted hyenas scavenge for food and often dine on the leftovers of other predators. They also kill and eat wildebeest, antelopes, birds, lizards, snakes, and insects.

A banded mongoose has coarse brownish-gray fur with dark bands across its back and lives in groups that may number 10 to 20, but sometimes have as many as 40 individuals.

Honey badgers appear to be immune to even the most potent snake venom, including deadly puff adder venom.

Warthogs are members of the same family as domestic pigs and may look ferocious with their four, sharp tusks, but they are basically grazers who feast on grasses, plants and roots.

An elephant that wants to frighten someone will make itself look very large by holding its head high, spreading its ears and trumpeting while shaking its head. An elephant that is intent on killing will put its ears back, curl its truck up around the side of its head and often it will approach silently.

Baboons eat just about anything and are capable of living in deserts and tropical forests alike. Their adaptability is one of the secrets to their survival.

When two baboons within a troop compete for resources, they’ll rush at each other baring their teeth in a display of threat.  A baboon’s canines are longer and sharper than a lion’s.

Able to launch 1.5 metres out of the water and exert 2,720 kilograms of bite force, crocodiles are some of the oldest and most successful apex predators on the planet.

Lions are wary of crocodiles and will generally avoid the water to stay away from crocs. Occasionally, crocodiles have been known to attack lions while they drink at the water’s edge (but lions are also known for attacking and eating baby crocodiles).

While cheetahs are Africa’s fastest sprinters, wild dogs are its endurance athletes – capable of running for long distances at up to 60 kilometres per hour. They use teamwork and run in shifts to exhaust their prey before attacking.

A hyena is three times heavier and much stronger than a wild dog.

Jackals are known for being highly adaptable and resourceful, and while they have not experienced population depletion like many African carnivores, they been negatively viewed as a threat to domesticated livestock.

A male leopard can weigh 80 kilograms, while a lioness can weigh almost twice as much.

Weighing in at over three tonnes, with an enormous, 150-degree gape and canines measuring up to 1.5 metres, the hippo is one of Africa’s most dangerous animals.

A golden jackal often howls after a lion makes a kill, signalling to other jackals. Then, once the sated lion leaves an unfinished carcass, the jackals will rush in to devour the remains. Jackals will bury their meat using their forepaws to hide it from scavengers.

Honey badger females have just one offspring at a time – not the multi-cub litters previously assumed – and though they care for their young for more than a year after birth, half of all cubs succumb to predators or starvation and die before reaching independence.

A cheetah can reach speeds of up to 100 kilometres an hour in a single sprint.

Isolated and pushed to the brink of extinction, white lions have only been seen in one place on the planet, Timbavati in South Africa. Their distinctive coats are caused by a rare, genetic trait. White lions are not protected by law according to the World Conservation Union.

A lion cub’s chance of making it to adult hood is about 20%. When coalition of nomadic male lions comes across a pride, they will kill all of the cubs, forcing the females into oestrus so that they can reproduce as soon as possible.   Although it’s common for lions to kill cubs, it is very unusual for them to actually eat them. Lionesses will often fight back when new males attempt to kill their cubs. In fact, defending cubs against infanticide is one of the primary reasons why female lions live in groups.

Octopuses are masters of camouflage because their skin contains pigment cells called “chromatophores,” that an octopus can contract and expand in order to change colour.

A Zebra’s stripes are as unique as fingerprints – no two are exactly alike – but each of the three species has its own general pattern.

A leopard will often haul its kills into the branches of a tree where it can protect it from hyenas and other larger predators.

Rather than fight, warthogs often flee, searching for another animal’s den to use for a quick escape. They typically back in, using their tusks to ward off unwanted guests.

Established in 1898 to protect the wildlife of the South African Lowveld, Kruger National Park stretches across nearly two million hectares and is home to a wide variety of species including 336 trees, 49 fish, 34 amphibians, 114 reptiles, 507 birds and 147 mammals.

Topis are very gregarious and usually live in herds of 15 to 20, although they sometimes live in herds of hundreds of individuals. Their social structure is flexible but sedentary or small herds are usually led by a dominant male.

Spotted hyenas have good hearing and sharp eyesight at night. Packs work together to isolate their prey, sometimes one that is ill or infirm, and pursue it to the death. The victors often squabble over the spoils, either among themselves or with other top predators like lions.

Great white sharks are known to attack prey on the surface of the water by shooting up from the depths with such an incredible force that the momentum sometimes launches the shark’s entire body – which can weigh up to three tons - clear of the water.

A baby elephant can solicit the help of its herd by screaming or making certain sounds. In the event that a herd of elephants returns for a lost member, the elephants can be aggressive towards anything that stands between them and the baby elephant.

Although their mothers are the primary caregivers, infant vervet monkeys are also cared for by other older females and siblings. Higher-ranking females in the troupe have the advantage of having many babysitters; showing an alpha female’s babies the most attention may allow others to gain status in the ranks.

Weighing a hefty six kilograms, martial eagles are the largest eagles in Africa. They can spot prey six kilometres away and have enough force to knock a person to the ground.

Killing is necessary to survive, but carnivores don’t always hunt to feed.

Lions are the mortal enemies of wild dogs and hyenas. Lions display “hatred” for their competition by killing them differently than they do prey they would normally eat. They often bite wild dogs and hyenas in the spine, leaving the paralyzed animals to die.

A python has around 200 specially-curved teeth designed to hold onto prey while it strangles it.

Buffalo are pregnant for almost two months longer than humans.

In the African bush, fights break out over protecting young and keeping food.

Wild dogs are efficient hunters, with the continent’s second highest success rate. Their kills often draw attention from their mortal enemy - hyena. At 25 kilograms, the dogs are only a third of the hyenas’ weight, but as a pack, they tip the scales in their favour. With a bite force that outranks all others in relation to size, one nip from a wild dog could inflict serious injury.

As old as the dinosaurs, crocodiles have lived on this planet for millions of years.

Lions are among Africa’s largest carnivores and capable of killing elephants, giraffes and hippos.  The only cat species that live and hunt in numbers, lions catch their prey by using teamwork, strategy and stealth.

Leopards are known be strong swimmers, and fish are occasionally part of their diet.

Honey Badgers are renowned for being fearless. With their formidable claws and acute sense of smell, they are also efficient hunters.

The Lesser Masked Weaver builds its intricate nests on the flimsy end of branches that jut out over water to deter predators.

A warthog’s lower tusks are longer and sharper than a lion’s canines.

At over two metres high and weighing five tons, elephants are the largest land mammals on Earth.

As teenage elephant bulls come of age, they are ousted from the herd by the matriarch and forced to wander either alone or in small groups with other young males.

When an elephant bull comes into musth, his testosterone levels increase about three times the normal amount, which directly influences his propensity for violent behaviour.

Elephants can drink over 200 litres of water daily and may travel up to 200 kilometres in order to find it. During times of drought, tensions between herd members can lead to violence.

Denser than bone, an elephant’s tusks can weigh as much as 200 kilograms and reach three metres.  A direct hit from an elephant tusk can be fatal.
ADVERTISEMENT