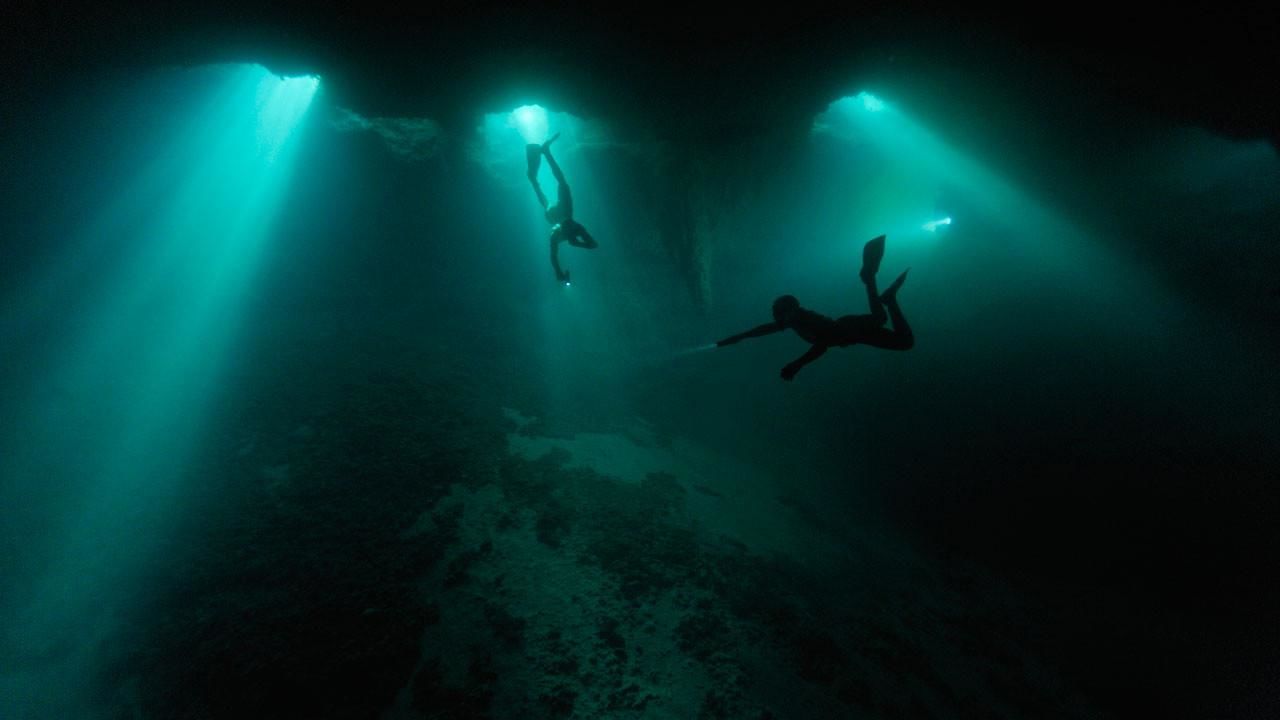 Blue holes are named for the contrast between the dark   blue water of their depths and the shallow, lighter waters around them, both of which are reflections of the sky.

·    Blue holes can exist on land or in the sea.
·    300,000 years ago, rain began carving holes in the limestone base of the Bahamas. As sediment thickened the limestone, these holes became caves.
·    Limestone is porous and let in salt water, flooding the caves as the sea level rose.
·    Fresh water on top meets salt water below at a line called the Halocine.
·    The chemical reaction at the Halocine with limestone creates horizontal shafts.
·    The Halocine is below sea level.
·    Flooding a blue hole as sea levels rise could change the chemistry that allows blue holes to be time capsules.

At sea level, the pressure exerted on a human body is one atmosphere.

·    Lucayans were farmers and fishermen in the Bahamas, arriving around 800 AD.
·    Lucayans bound children’s foreheads and backs of heads with boards, to create a conical shaped head.

·    Sawmill sink has a layer of hydrogen sulphide created by decaying matter that has fallen in.
·    Hydrogen sulphide is a poisonous gas that enters diver’ bodies through their skin.
·    Less than 100 parts per million hydrogen sulphide smells like rotten eggs and will make your lips tingle.
·    Decomposition that creates hydrogen sulphide also takes oxygen from the water below, creating an anoxic or oxygen-free zone that preserved whatever falls in.
·    Bones do not decay because the bacterial and fungus that normally cause decay cannot exist without oxygen.
·    At the end of the Ice Age, about 15000 years ago, the sea level was 122 metres lower than it is today and some parts of the blue hole were dry and occupied by animals.
·    Sawmill sink contains the bones for an undescribed species of flightless rail.
·    Three never before seen species are identified in Sawmill sink.

Stalagmites and stalactites are mineral formations deposited in a cave by surface water.

·    Stalagmites and stalactites’ shape and chemistry capture a biography of the surface environment, including how much it rained, what chemicals were in the rain and soil, and temperature.
·    Stalactites and stalagmites stop growing when a cave floods.
·    A red dust forms a thick layer in the cave wall, indicating that at one time, the island’s surface was covered with red dust.
·    The red dust originated from the Sahara desert, about 6437 kilometres away.
·    Stalagmites sometimes reveal tree like rings, with each strata signifying years of growth.
·    The Bahamas stalagmite grew at a rate of 10 thousandth of a millimetre a year.
·    The Bahamas stalagmite has a bands of iron, possibly from the Sahara, corresponding with several of the Heinrich events
·    Heinrich events are global climate changes.
·    Sahara dust has been correlated with six Heinrich events from the last 80000 years.
ADVERTISEMENT