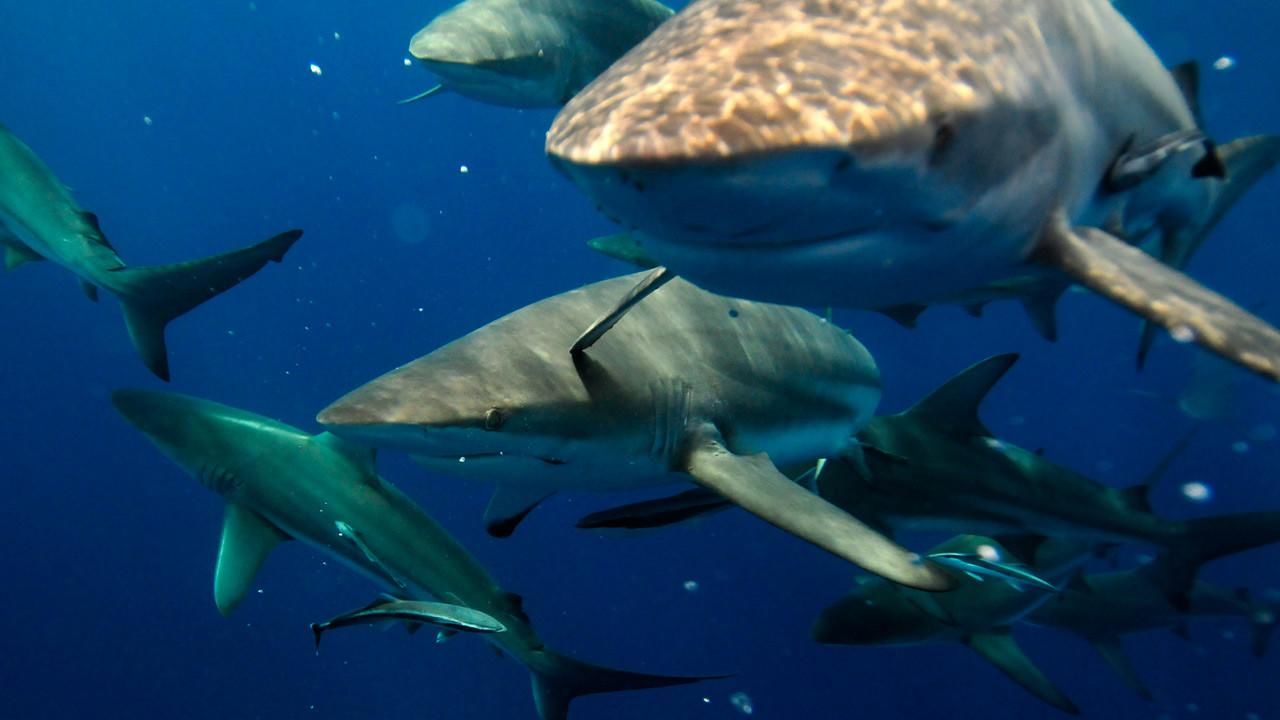 The Predation Cycle is usually divided into five phases: detection, approach (behavior), attack, subjugation, and consumption (Endler 1986). For sharks relatively little is known about shark behavior with regard to shark attacks. Filming could provide an insight into this.

The way a shark approaches a diver may give an indication as to which of its senses it is using most (visual, tactile, auditory, olfactory, electro-sensory). These would all be talked about on film. An understanding of which senses are most used may give us a better understanding of which ones to suppress (or which ones elicit a response) when a shark approaches us. It probably differs between species. This understanding will enable safer shark encounters and maybe reduce some instances of shark attack.

Shark behavior to divers changes with water clarity, ocean depth, tidal height, ambient light levels, current direction and speed. Filming under different conditions is worthwhile to see if any changes. The show will also make use of bad sea days when the water conditions aren’t perfect.

There are three major kinds of unprovoked shark attacks:

In both bump and bite and sneak attacks, repeat attacks are not uncommon and as a result the injuries are much worse. These types of attack are the result of feeding or antagonistic behaviors rather than being cases of mistaken identity. Most shark attacks involving sea disasters, e.g. plane and ship accidents, probably involve "bump and bite" and "sneak" attacks.

White sharks (and tigers) may do a lot of “gaping and mouthing” on an object. It’s a way to taste/feel prey. Because they often feed on prey too large to swallow they may exhibit palatoquadrate protrusion (jaws extend outwards) more than other species. This can be shown on film. Also close up of teeth will reveal differences between the different shark species, which can be discussed.

It is important that for each test all diver variables e.g. size, sex, wet suit color etc. and environmental conditions (water temperature, visibility, currents etc.) are constant and the same. The only variable that differs is the one being tested. These constants need to be the same throughout the entire shoot. E.g. Mark can’t have a black suit for the urine experiment and then a green suit for the sound experiment.

We will also be testing how humans react to sharks with heart rate monitors on the divers.

2 divers in water at same time (same size and sex, wet suit color etc.). One diver is motionless and one has normal behavior. Divers must be separated. Breath hold NOT SCUBA.

Normal posture vs. lying on a surfboard

2 divers in water at same time (same size and sex, wet suit color etc.). One diver normal, the other lying on a surfboard. Divers separated and on breath hold NOT SCUBA.
Experiment result: The sharks trailed it and were very interested at first and then lost interest. Board had go pros on top and underneath.

5 divers in water. One diver separates from the group. The other 4 remain together. Who gets the most shark attention? Breath hold NOT SCUBA

2 divers in water at same time. One diver is a male and one a female (should have same wetsuit colors) who gets the most activity. Divers must be separated. Breath hold NOT SCUBA

2 divers in water at same time (same size and sex, wet suit color etc.). One diver is on breath hold the other on SCUBA who gets the most activity. Divers must be separated

Sharks have a keen sense of sound (talks about sound waves moving through water). I’ve got my wave recording equipment which we can use to register the sound frequency of the different sounds.

Props for the sound experiments will include:
Crunching a plastic Bottle
Splashing with Fins
Hydrophone
Ryan’s laptop
Experiment results: It drove the sharks nuts and soon Gail was surrounded by 7 Gills.

2 divers in water at same time (same size and sex, wet suit color etc.). One diver has a bottle of urine he slowly seeps in the water. The other diver has none. Divers must be separated. Breath holds NOT SCUBA.

Demski and Northcutt (1996) found that olfactory bulbs of the white shark comprise 18% of total brain mass, the largest proportion of any shark measured to date, suggesting that scent detection is of great importance to these predators (urine experiment, or other scents).
Experiment Result: No reaction from sharks

2 divers in water at same time (same size and sex etc.). One diver in wetsuit and the other swimming shorts. Divers must be separated. Breath hold NOT SCUBA
Experiment results: Ryan swam down to join the girls and immediately the sharks were attracted to his face mask. Olivia had a shark attempting to eat her fins.

2 divers in water at same time (same size and sex etc.). One diver in bright colorful wetsuit the other in plain one color. Divers must be separated. Breath hold NOT SCUBA. Many variants you could do e.g. bright fins, hoody, entire wetsuit…. Etc. Maybe one diver could have bright lifejacket?

Gruber and Cohen (1985) found that the white shark possesses a retina with a low rod–cone ratio (4:1) and concluded that this species is primarily a diurnal hunter. The rods are sensitive to faint light and the cones distinguish color. So although the shark can see in low light conditions, the high proportion of cones may enable it to distinguish color very well (color wet suits experiments).
Experiment results: Looks like they were interested in the colors but it’s safe to say that none of them became aggressive.

2 divers in water at same time (same size and sex etc.). One diver in farmer john (contrast between white legs/arms and suit) the other one piece suit. Divers must be separated. Breath holds NOT SCUBA.

2 divers in water at same time (same size and sex, wet suit color etc.). One diver has some shiny objects dangling from them the other has nothing? Divers must be separated. Breath holds NOT SCUBA.

Shark attacks that occurred in Hawaii during the latter half of the twentieth century resulted in a series of shark culling programs aimed at reducing shark attack risk by removing large tiger sharks from coastal waters. These programs stopped when it was shown that tiger sharks not attached to same localized area.  A better understanding of how sharks interact and behave under different stimuli to divers may help to provide a better shark attack risk assessment.

Once sharks are present we will then run experiments for the best way to repel sharks.

One diver in water on breath hold. Does he see more interaction with more bait in the water?

Tiger sharks are opportunistic predators that consume a diverse array of prey—including teleosts, elasmobranchs, mollusks, crustaceans, reptiles, mammals and birds. Their diet (and therefore possibly behavior) changes with size. Small tigers feed primarily on fish. Larger sharks on larger prey such as turtles, dolphins, dugongs. Filming may provide information as to how shark behavior to divers changes with size.

One diver in water on breath hold. Does he see more interaction in dirty, or clean water

One diver in water on breath hold or SCUBA. Does he see more interaction at surface, mid-water, or on bottom? Or I guess you could have 3 divers (top, middle and bottom). All same size, sex, shapes, wetsuits etc. and see who gets most activity.

Tiger sharks typically exhibit “yo-yo” diving (swimming up and down throughout water column).It’s an effective search strategy for locating prey throughout the water column. They do this because they feed on such a diversity of prey. Their prey is often at the surface e.g. turtle or birds. These sharks typically take prey at the surface more than other sharks. As a result, you will see a marked difference in the way these sharks approach floating objects compared to other species such as black tips and duskies etc. This can be shown in filming.

Tiger sharks rarely chase after prey, or attack prey that that have inspected closely. They are relatively less maneuverable than some other species and not really built for speed like Mako for instance. Instead they tend to rely on stealth and rather stalk and attack unwary prey (stealth also used by white sharks, other species e.g. black tips chase prey this can be shown on film). Reliance on stealth may help to explain the fact that it preys on so many species at the surface. Its vertical stripes provide great camouflage and less vigilance below by animals on surface. Also attacking from below reduces the number of escape routes for prey.

White sharks are able to stalk seals from below, searching the surface for its prey’s silhouette. Stalking undetected from depth and then rushing to the surface to capture prey is a predatory tactic that has been proposed for seven gill sharks (Ebert 1991), tiger sharks (Heithaus et al. 2002), blue sharks (Carey and Scharold 1990) and white sharks (Tricas and McCosker 1984; Strong 1996; Goldman and Anderson 1999). Compare these behaviors with other shark species e.g. black tips and duskies.

One diver in water on breath hold. Does he see more interaction at a certain time of day?

In Hawaii most (67%) shark bites occur during the middle portion of the day, when the majority of in-water recreation occurs (Meyer 2007). This suggests that bites are related to increased no. of people rather than intrinsic rhythmicity in the foraging behavior of tiger sharks. You can film at different times of day to see if behavior changes. Applicable to other shark species as well.

Experiment results: The night shoot - Mark emerged from underwater and called Ryan to jump in immediately as the response the team was getting was very unusual. The sharks were very active. The sharks were definitely more skittish and feisty at night. Not so many sharks around and they hung low in the water. At the beginning of the night shoot - the cameramen were getting bumped by sharks at one point.