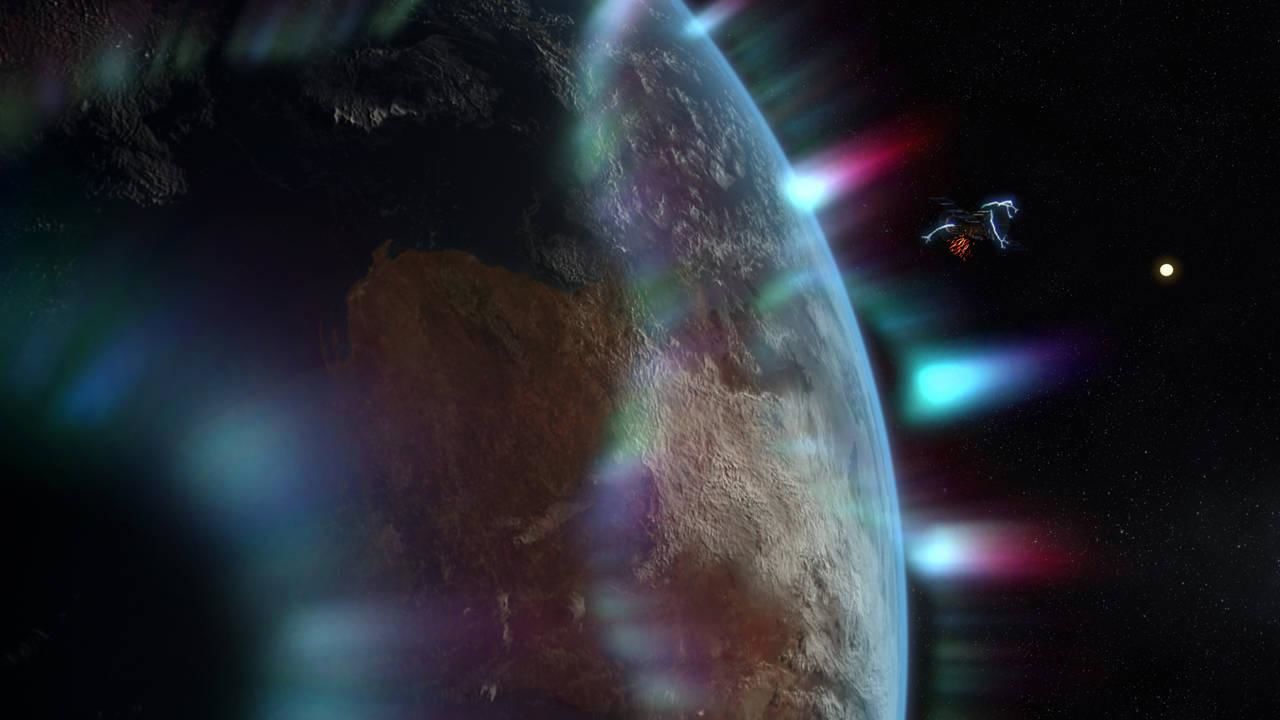 Robert Ballard was born in Kansas, but grew up in San Diego, California, where a childhood fascination with tidal pools and marine life led him to study marine geology. In 1962, when he was only 19 years old, his father, a missile scientist at North American Aviation, helped him get a job at the aerospace company's Ocean Systems Group. The company was competing for a contract to build a three-man deep-ocean submersible. In later years, Ballard was to spend much if his career in such a vessel, known as ALVIN. Young Ballard earned undergraduate degrees in chemistry and geology at the University of California at Santa Barbara. While at Santa Barbara he participated in the Reserve Officers Training Corps (ROTC) and earned an army commission. When he was called to active duty during the Vietnam War, he requested a transfer to the Navy, to make better use of his training as a marine geologist. The Navy assigned the young geologist to Woods Hole Oceanographic Research Institute in Massachusetts, where he continued his work in deep submergence. After leaving the Navy, he returned to Woods Hole as a research fellow. He earned a Ph.D. in geology and geophysics in 1974 and went to work at Woods Hole as a full-time marine scientist. His first major expedition, Project Famous, was the first to perform successful field mapping underwater. For more than a decade he spent four months a year at sea, logging countless hours underwater, exploring the uncharted mountain ranges of the ocean floor. Ballard and his team explored the undersea mountain range known as the Mid-Atlantic Ridge, and descended 20,000 feet in the Cayman Trough. In these expeditions, Ballard discovered that the entire volume of the earth's oceans is, over a period of years, recycled through the earth's crust. This phenomenon explained the mineral composition of seawater for the first time. This stage of Ballard's career climaxed with the landmark discovery of thermal vents off the Galápagos Islands. Ballard and his crewmates were astounded to find an abundance of plant and animal life in the deep-sea warm springs. Plants found here synthesize food energy chemically, rather than from sunlight, through photosynthesis, as all other vegetation on land and sea does. This discovery has enormous implications for the possibility of life on other planets, as well as here on earth. Ballard was also among the first to see the "black smokers," submarine volcanoes in the Pacific Rise, whose emissions are hot enough to melt lead. Not satisfied with the possibilities of undersea research offered by the slow-moving submersible ALVIN, Ballard developed ANGUS (Acoustically Navigated Geological Underwater Survey), a submersible camera which could remain at the ocean floor for 12 to 14 hours, and take up to 16,000 photographs in a single lowering. In 1980, Ballard took a sabbatical from Woods Hole to teach at Stanford University in California. While there, he conceived a new automated system, for undersea exploration: a maneuverable, remote-controlled photographic robot which broadcasts live images to a remote monitor, where a large team of scientists can survey the ocean floor continuously and maneuver the remote camera. By now, Ballard had earned tenure at Woods Hole, where he had the opportunity to assemble a top-notch team to build such a system. But like all team leaders at Woods Hole, he was required to find his own funding for the project. Ballard took his proposal to the U.S. Navy, and received the go-ahead from Navy Secretary John Lehman in 1982. Ballard and his crew embarked on a mission that was to make headlines around the world. Ballard had resolved to find the sunken hulk of HMS Titanic, the supposedly "unsinkable" ocean liner which had sunk, with massive loss of life, after she struck an iceberg on her maiden voyage in 1912. Drawing on all of Ballard's accumulated expertise in undersea exploration, he and his crew located the wreck, more than two miles beneath the waves of the North Atlantic, on September 1, 1985. Ballard was then forced to wait an excruciating year for weather conditions favorable to a manned mission to view the wreck at close range. The next year, he and a two-man crew, in the ALVIN submersible, made the two and-a-half hour descent to the ocean floor to view the wreck at first-hand. Over the next few days, they descended again and again and, using the Jason Jr. remote camera, recorded eerie scenes of the ruined interior of the luxury liner. On subsequent expeditions, Ballard perfected the Argo-JASON system, using it to locate the German battleship Bismarck, sunk in World War II, and the passenger liner Lusitania, sunk by a German torpedo during World War I. in 2002, he located the wreck of John F. Kennedy's PT-109, the craft commanded by the future president in World War II. To date, he has conducted more than 120 undersea expeditions, pioneering the use of the latest in submarine technology to plunge ever deeper into the mysteries of the ocean. In 1989, Ballard founded the JASON Project to bring the wonders of the earth, air and sea to classrooms around the world. More than 1.7 million students have participated in JASON programs, learning about natural phenomena -- from volcanoes to storm systems – and viewing live transmissions from JASON robots as they explore the undersea world. Dr. Ballard has received numerous awards and honors for his discoveries, including the Lindbergh Award, the Explorers Medal and the Hubbard Medal of the National Geographic Society. In 2003, President George W. Bush presented him with the National Endowment for the Humanities Medal in a ceremony at the White House. Today, Robert Ballard is President of the Institute for Exploration in Mystic, Connecticut; Scientist Emeritus at Wood's Hole Oceanographic Institution; and Director of the Institute for Archaeological Oceanography at the University of Rhode Island. In the last-named post, he is bringing his daring and ingenuity to bear on ancient mysteries, uncovering the history that has been lost for centuries beneath the waves.

Areas of Interest:
(1) A study of chemical gradients in coexisting Basaltic and Trondhjemitic Magmas. We have discovered a xenolith of Na-rich Lockatong argillite that fused around its margins when immersed in the magma of the Palisades Sill. The complex chemistry of the fusion zone, now represented as a pyroxene trondhjemite, indicated diffusion of ions across the liquid liquid interface. Slices, cut perpendicular to the long axis of a core containing the 200 million year old contiguous rocks, were chemically analyzed for major, minor, and trace elements including REE's. What are the relative diffusivities of these ions in the coexisting melts? Why didn't the two melts physically mix?
(2) The petrogenesis of leucocratic dike-like rocks in the Palisades Sill, and Laurel Hill intrusive. Our chemical data, including chondrite-normalized REE plots, indicate that
many of the leucocratic dikes in these intrusives are derived from fused sediment, and are not differentiates of the Palisades magma, or any other basaltic magma. We are interested in understanding the physiochemical factors that play a role in sediment fusion.
(3) Environmental GIS(Geographical Information Systems) studies of Staten Island: i.e., Ground water studies, surface water studies, soil, and rock studies; slope studies, and cancer studies.
(4) Pedagogy: Improving laboratory instruction by using the latest technology and innovative methods.

Mike Brown is a professor of planetary astronomy at the California Institute of Technology and has been on the faculty there since 1996. He specializes in the discovery and study of bodies at the edge of the solar system. Among his numerous scientific accomplishments, he is best known for his discovery of Eris, the largest object found in the solar system in 150 years, and the object which led to the debate and eventual demotion of Pluto from a real planet to a dwarf planet. Feature articles about Brown and his work have appeared in the New Yorker, the New York Times, and Discover, and his discoveries have been covered on front pages of countless newspapers worldwide. In 2006 he was named one of Time magazine's 100 Most Influential People as well as one of Los Angeles magazine's Most Powerful Angelinos. He has authored nearly 100 scientific papers, and his writing has appeared in such venues as the New York Times, Physics Today, and the World Book Science Year. He is a frequent invited lecturer at astronomical meetings as well as at science museums, planetariums, and college campuses. At Caltech he teaches undergraduate and graduate students, in classes ranging from introductory geology to the formation and evolution of the solar system. He was especially pleased by his most recent honor, the Richard P. Feynman Award for Outstanding Teaching at Caltech. Brown received his AB from Princeton in 1987, and then his MA and PhD from University of California, Berkeley, in 1990 and 1994, respectively. He has won several awards and honors for his scholarship, including the prestigious Urey Prize for best young planetary scientist from the American Astronomical Society's Division of Planetary Sciences; a Presidential Early Career Award; a Sloan Fellowship; and, of course, the one that started his career, an honorable mention in his fifth-grade science fair. He was also named one of Wired Online's Top Ten Sexiest Geeks in 2006, the mention of which never ceases to make his wife laugh.

Dr. Rosaly M. C. Lopes is a Senior Research Scientist at NASA's Jet Propulsion Laboratory, where she is also Lead Scientist for Geophysics and Planetary Geosciences. Dr. Lopes was born and raised in Rio de Janeiro, Brazil, where she grew up by the famous Ipanema Beach.  She moved to London, England, to study astronomy at the University of London, from where she graduated in 1978.  For her doctoral studies, she specialized in planetary geology and volcanology and completed her Ph. D. in Planetary Science in 1986. Her major research interests are in planetary and terrestrial geology and volcanology. During her Ph.D. she traveled extensively to active volcanoes, particularly Mount Etna in Sicily, and became a member of the U.K.’s Volcanic Eruption Surveillance Team. Dr. Lopes joined JPL as National Research Council Fellow in 1989 and, in 1991, became a member of the Galileo Flight Project, a mission to Jupiter. She was responsible for observations of Jupiter’s volcanic moon Io from 1996 to 2001, using Galileo’s Near-infrared mapping spectrometer. During this exciting period of her career, she discovered 71 active volcanoes on Io, for which she was honored in the 2006 edition of the Guinness Book of World Records as the discoverer of the most active volcanoes anywhere.

Geoff Marcy is one of the pioneers and leaders in the discovery and characterization of planets around other stars.  He and his collaborators have discovered nearly half of the 350 known exoplanets. They found the first system of multiple planets around a normal (main sequence) star, the first Saturn-mass planet, the first Neptune-like planet, and the first transiting planet (a co-discovery with T.Brown and D.Charbonneau). His group is now searching for Earth-like planets, using three techniques: 1) NASA's Kepler Mission to detect transiting earth-like planets 2) A new telescope and spectrometer at Lick Observatory designed by Steve Vogt to survey the nearest stars 3) NASA's future "Space Interferometry Mission" (SIM).  Marcy has won several awards including the Shaw Prize (2005, shared with M.Mayor), Discover Magazine Space Scientist of the Year (2003), the NASA Medal for Exceptional Scientific Achievement (2003), California Scientist of the Year (2000), Beatrice Tinsley prize from the American Astronomical Society (2002), and membership in the U.S. National Academy of Sciences (2002).  He does education and outreach for science, which included a guest appearance on the David Letterman Late Show (11 April 2001).  He has over 350 publications in refereed journals.  He currently is mentoring the research of two undergraduates, one graduate student, and one postdoc.

Ph.D. (Cambridge Univ., UK), Joint appointment as Professor in the Oceanography and Atmospheric Sciences departments of University of Washington, Seattle, USA. Member of the National Academy of Sciences, and Fellow of the American Academy of Arts and Sciences, American Geophysical Union and the American Meteorological Society. Former Guggenheim Fellow, Cambridge University.
ADVERTISEMENT