I first went to Kenya in 2010 to film and almost instantly, I fell in love with Africa. As clichéd as it sounds, there is something about Africa that draws you in. Not like any other welcome gesture but more like a free-fall into a never-ending embrace. So when I was assigned to produce this episode, I was elated.

Turkana sits about 800km away from Nairobi – it’s so remote that to access, you either charter a flight or take a 2 day drive to get to the desert. Upon arriving into Turkana, I was overwhelmed with the sprawling landscape. The desert was spread miles out, acacia and thorny tundra peppered everywhere and the intensity of the heat (41 degrees Celsius!) wasted no time in greeting us.

Though barren, we discovered a richness to life out there – emulated by the characters and local tribes we’ve come to be friends with. Turkana is unlike any other place we had filmed in before – in terms of covering the expanse of the areas like we had to.

We knew the landscape would prove challenging to us – intense heat, strong winds – but little did we expect getting caught in a sandstorm and in crosswinds during our aerial survey! That was certainly quite an experience, having to deal with dust and sand collecting on our gear every day and the potential of flipping over in a tiny Cessna plane.

Getting across the lake that’s 4 times the size of London was a logistical problem. Apart from braving the unpredictable lake on boat, we flew across with our intrepid pilot and one can only imagine the sheer vastness of the lake – it was astounding. We had numerous aerial opportunities so Kris and I thought of fun angles to mount the Go Pros every chance we got. But because the Cessna is such a light plane, some of the shots we got need to be stabilized in post.

The characters we met are full of passion in their fields and we found it humbling that some of them would spend months out, camping under harsh conditions, in search of answers to our human ancestry. Having them explain to our simple minds how and why they do what they do was gratifying – we felt we too were part of a field school, learning from all these scientists.

Some of the most rewarding experiences were: (1) Taking a trip to Central Island, an island so remote that there are no human inhabitants. There is a massive crater lake filled with thousands of flamingos that words can’t describe the majesty of its beauty; (2) visiting a local Turkana tribe where the children were so fascinated by my straight hair that they started to groom m and (3) meeting the great Dr. Richard Leakey – the man about Turkana – and having a private dialogue with him before he granted us an on-camera interview.

The two weeks we spent filming in Turkana are and will be unforgettable. We milked every opportunity to film the best out of the landscape that is seemingly empty but yet so full of life and culture.

Having been asked to pencil some impressions regarding our recent shoot in Kenya, I find it impossible not to be constantly amazed by this incredible continent.

Our shoot focused on the world heritage site of Lake Turkana, the largest desert lake in the world, in the environmentally hostile area of Northern Kenya. A truly desert landscape with all the elements that create anxieties in the most hardened of cameramen. Heat, ultra fine dust and incessant wind were the order of most days.....just what expensive camera equipment despises.

I have been fortunate to travel to the African continent many times over the years and when that time comes to leave, it is always the people who leave me with the greatest inspiration.

On my very first trip to Zimbabwe in the early 90’s I took a Polaroid camera and would take shots of the children and watch their innocent faces light up as they saw the magic of the print develop before their eyes. Today that same instant joy can be produced with a smart phone as I filmed them jumping or singing or playing so that they may see them selves back on that tiny screen. For many of these Turkana children seeing themselves in motion is something so foreign it is like a kind of magic. I really do love those short precious moments I have to entertain the kids and one soon realizes that these small human beings are just that...children.....sponges for knowledge... and to show a little one how to scroll through the photos on a phone is such a revelation to them...but they get it as quickly as any child might, no matter where they live.

But beyond all else this trip to the Lake Turkana region with its fragile eco system, really made me think about how we are treating our planet and that we must all take heed. The Turkana tribe that was historically much more nomadic have become less so as their population has swelled, which has led to overgrazing and deforestation as the destructive production of charcoal is rampant.

As we chronicled the lives of these Turkana people the resilience of these people to survive in their environment resonated with all of us. Watching the women and children spend their days fetching water in temperatures beyond 100 degrees fahrenheit   for me was a reminder of how far we have come as a species and yet how far we have to go.

On one of our last days as the sun was setting we had stopped to capture some footage of grazing camels, when a Turkana women came running up to our van, baby on her back, an eight year old son running beside her and a forty five pound of maize on her head. She pleaded with us to let her ride in the van which we gladly did. She had walked the eight hours into town that morning and was on her way home that night with the maize.

It was the first time she had ever been inside a vehicle and I took this photo to document their curiosity. 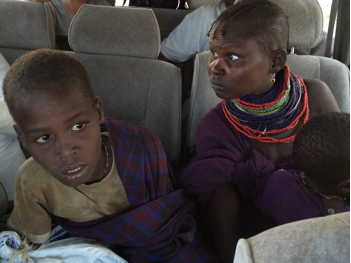 We saved her about four hours of walking.

The people of Africa do truly inspire me.