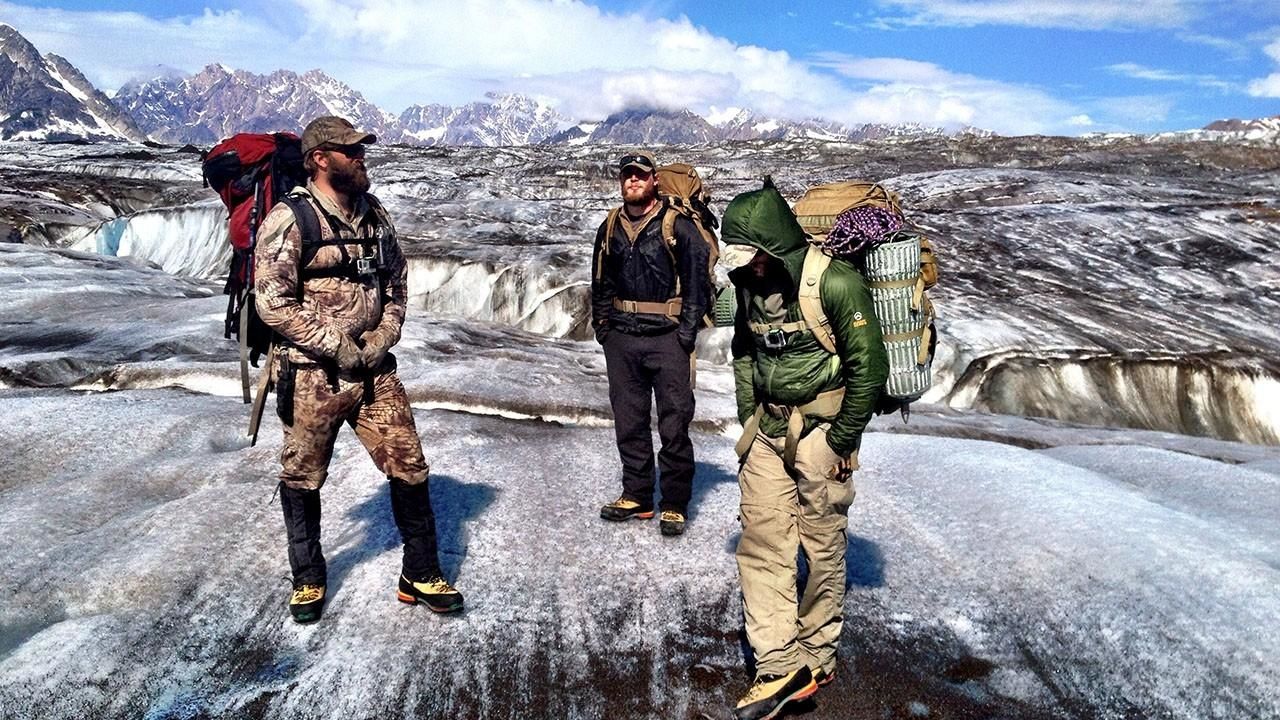 Austin Manelick is an Alaskan through and through. Under the watchful eye of his father, an Alaskan wilderness guide, Austin began practicing subsistence hunting at the age of 5. To this day Austin still lives a subsistence lifestyle.  Austin knows the Alaskan wilderness is a dangerous place and that you must learn to do whatever it takes to survive.  If he ever finds himself low on food, it is not uncommon for Austin to catch, and snack on live frogs or forage and eat berries found in bear feces.  Not only a master forager, Austin is a crack shot with a long rifle and takes pride in his skill with a bow and arrow. Paired with his knowledge of game tracking, Austin isn’t too concerned about going hungry.  Austin knows the key to any survival situation is teamwork and considers himself the perfect team member. Knowing when to step up and take control or when to step back and follow orders, Austin’s mantra is “Teamwork is Dreamwork.”

Brent came to Alaska to ski. But when he hit the Alaska wilderness, the frontiersmen bug bit hard. His life was changed forever and this former Boy Scout from Excelsior, Minnesota became an Alaskan lifer.  Today he lives 150 miles northwest of Fairbanks in a town so small he and his dogs are the only permanent residents. In Excelsior, he’s become adept at bush living—his regular caloric intake comes from plants and berries growing on his land, as well as any wildlife that happens to wander through. You will more often find him catching, trapping, and killing his own food than taking a stroll down the grocery aisle. A 200-mile trek through the wilderness doesn’t intimidate Brent in the slightest. As a matter of fact, he’s done six 1,000-mile dog sledding expeditions for the Yukon Quest, and has guided excursions through any and all of Alaska’s many landscapes. Brent is as self-taught as they come, and he loves to learn things the hard way. That has amounted to accidentally slicing off fingers (they were reattached) and a crash course in log- cabin building (which he can now practically do in his sleep).

Plain and simple, Dallas Seavey is Alaskan Royalty. He comes from a long line of tough Alaskans and has the stories to prove it. In 1973, Dallas’ grandfather created the Iditarod Sled Dog Race, a grueling 1200 mile race across the state of Alaska through some of the world's toughest conditions. In 2012, following in his grandfather and father's footsteps, Dallas Seavey became the youngest person to ever to win the Iditarod. Dallas is a master of Alaskan survival, spending months in the bush training his dog team for the demanding race. The 5 months of the year he is not training, Dallas works the deck of a salmon boat with his brother, hauling in nearly 2,300 pounds of Salmon a day. Dallas is constantly finding new ways to challenge himself. Last month he decided to run a marathon without training because he “wanted to see if he could.” Dallas sees Ultimate Survival Alaska as the next challenge he is ready to conquer.

Tyrell is Dallas' older brother.  The brothers grew up in the coastal fishing town of Seward, Alaska and the call of the ocean has always drawn Tyrell to it.  A commercial fisherman by trade, every 100 day season he fishes thousands of pounds of salmon from the waters off the coast of Alaska.  It's a grueling way to make a living but one that allows him to do what he wants the rest of the year.  Out of season, Tyrell, like his younger brother, is always on the lookout for adventure.  He too has run the Iditarod a number of times. While he was still a teenager he walked across South America just to see if he could. Fourth generation Alaskans, the boys grew up with romance of Alaska, the world and the promise of a life with no fear.

Marty Raney hasn’t always lived in Alaska but doesn’t have much to say about the time he spent in the lower 48. Inconsequential, he says. Ask Marty what he does for a living and he’ll tell you his business card says, “log builder, stone mason, explorer...” and he’s got the rough hands to prove it. That business card also says, “mountain guide”, another title he’s certainly earned. Marty has led 17 trips up Denali, the highest peak in North America, with people who never thought that they would ever be able to achieve such a thing. It's Marty's job to make sure they do. Sadly, he’s also seen McKinley claim a friend who pushed himself too hard. There is no question that Marty knows the best and worst of what the Alaskan wilderness has to offer.

Matt Raney is a true product of the Alaskan bush. Born and raised in Wasilla, at the age of 12 Matt and his father Marty Raney built their family home with nothing but a chainsaw and the logs on their property.  A true outdoorsman, Matt has learned a trick or two about surviving in the wild, and is excited to show off a rare fishing technique, taught to him by some “crazy Russians” while on an expedition in Russia. Another adventure took Matt and his father Marty to Mt. McKinley. After 28 days on the mountain, the duo was forced to turn back just 500 feet from the summit after being caught in 50mph winds and blinding snow. Though Matt is in expert in survival, he knows he still has a lot to learn from his father and hopes this trip will be an opportunity to do just that.

The first thing you notice about Tyler Johnson is his fierce intelligence. He speaks quickly and intensely. Aside from intelligence, Tyler says his other positive traits include being good-looking, ambitious and crazy. Crazy for competition, crazy for the challenges nature provides him. “It’s the best challenge I’ve ever found in my life.” Despite being the co-owner of two successful Anchorage businesses, Tyler has had some truly hair-raising adventures. From exploring Kathmandu to climbing 20,000 feet with no oxygen in Nepal, Tyler is fearless. He claims to have climbed every high-peak in his home state. He believes he is a natural leader, especially in adventure challenges. He’ll control the maps, orient the team and lead them to success, all without yelling. He has no patience for micromanagers and screamers. Despite his passion and intensity, Tyler takes the risks very seriously. “Alaska is one of the most dangerous places to explore. There is no doubt that Alaska is one of the most dangerous places in North America... Alaska will kill you without prejudice.”

Willi is no stranger to the outdoors, he grew up hunting, fishing, and foraging while living and working on the family farm. He's been a professional mountain guide for nearly 38 years and has worked on all of the world's continents. Willi has spent most of his life exploring the Alaskan frontier and he has ventured the globe even mounting Everest multiple times.  He's guided wilderness canoe trips, sea kayaking, skiing expeditions and has been guiding and teaching for the past quarter century. Willi has been climbing, guiding and teaching for the past quarter century. Willi is considered one of the premiere instructors in America and his students have had outstanding success in reaching personal goals. He has amassed hundreds of ascents (many while guiding) in Washington, Canada and Alaska. Fluent in Spanish and well versed in South American culture, he has an outstanding reputation amongst his peers. Needless to say, Willi has developed quite a following and has led climbs to Mt. Sajama, Cho-Oyu, Island & Mera Peak and multiple guided ascents of Denali and in Mexico, Ecuador and Bolivia. He's considered to be one of the world's leading climbing and logistical experts in the region. Willi is the consummate mountain guide and one of the most respected mountaineers in America.