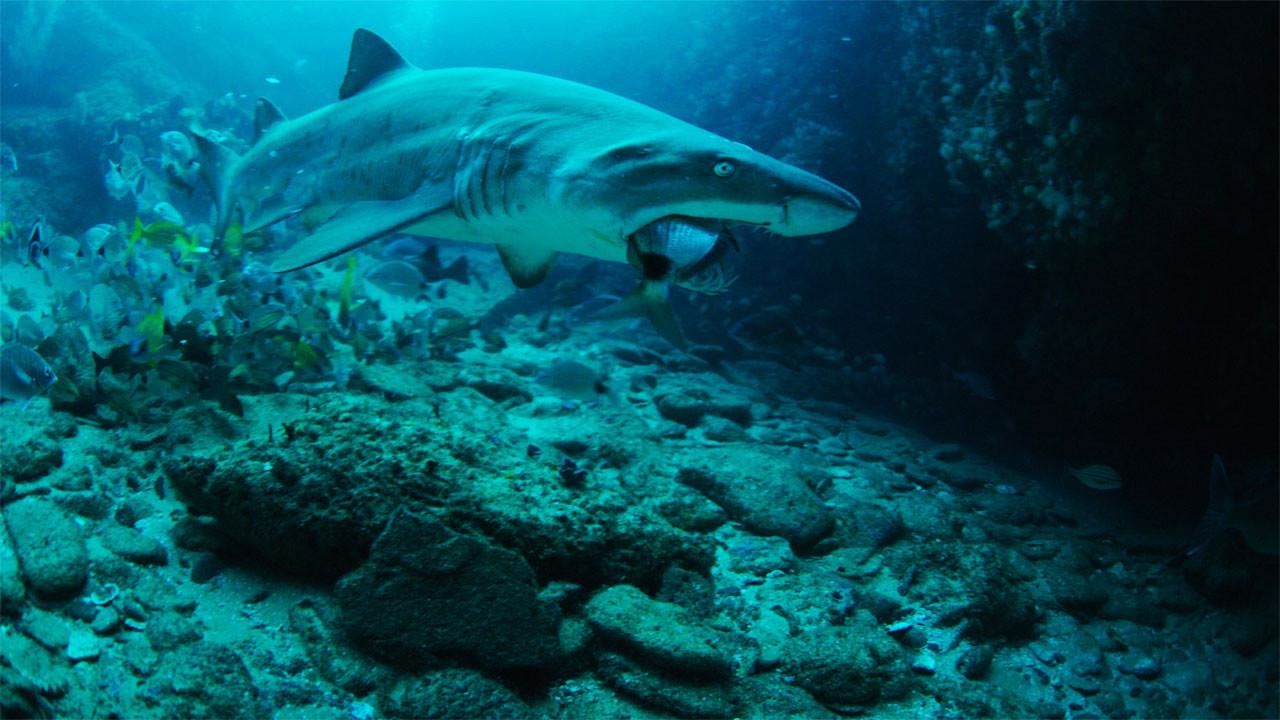 Aliwal Shoal is off the coast of Africa.

Aliwal Shoal is midway up the South African coastline.

Aliwal Shoal is five kilometres out to sea.

Aliwal Shoal is three metres below the surface at the shallowest point and can plunge to almost 30 metres.

Aliwal Shoal has been carved out by the Agulhas and Benguela currents.

Aliwal Shoal was created when sand and seashells dissolved during a period of heavy rainfall and eventually reformed into dune rock.

Aliwal Shoal’s name comes from a ship that narrowly avoided colliding with the shoal in 1849.

Ships have sunk near the Shoal, and have created underwater habitats.

The Agulhas current travels through the waters of the Indian ocean, bringing the water temperature up to 28 degrees Celsius.

The Benguela current pushes the Atlantic ocean up the west coast of Africa.

In the winter, a small part of the Benguela current forks up the east coast of Africa and collides with the warm waters of the Agulhas current.

The meeting of the Agulhas and Benguela currents creates a nutrient rich environment.

When currents shift, erosion occurs on the Shoal.

By late June, water temperatures around the Shoal can drop to as low as 19 degrees.

Clownfish have a protective mucus layer over their skins that make them immune to an anemone’s sting.

Clownfish can lay their eggs year round.

Clownfish guard their eggs, laying them as close as they can to an anemone.

If a female Clownfish dies, the dominant make will change sex and take over the female’s role over the span of a month.

Anthias or Goldies, live in harems of one male and up to a dozen females.

Female Anthias are gold and males are lager and have more complex colouring.

All Anthias start life as a female. If the male is removed from a harem, the largest female changes sex and becomes a male.

Damselfish are able to grow their own algae to eat.

Male damselfish must advertise for a female to come lay her eggs by making a nest and wiggling his tail to attract a female.

Triggerfish make it known that they are up for mating by swimming on their sides.

Tiger sharks can grow up to 7.5 metres long and weigh more than 900 kilograms.

Tiger sharks have excellent eyesight, protected by membranes over the eyes.

Tiger sharks’ teeth are designed with both serrated edges and a hook. Their bite has the pressure of three tons per square centimetre.

Tiger sharks are endangered due to hunting.

Many turtles lay their eggs just north of Aliwal Shoal each year.

Hawksbill turtles are named for their small tapered head and hooked beak. They grip the reef with paddle-like flippers with claws.

Turtles are preyed upon by Tiger sharks.

Turtles possess a complex internal mapping system, which functions off of magnetic poles.

Turtles are able to return to the same exact beaches year after year to breed and lay their eggs.

Loggerhead turtles are unaffected by jellyfish stings and prefer to eat them.

Loggerhead turtles mate along the entire migratory route and can be found at the Shoal all year round.

Loggerhead turtles can live up to 80 years.

Ragged Tooth sharks, also known as the Grey Nurse shark, Sand shark, or Raggies, are up to 3.5 metres long, have long, pointed teeth with a slight curve, devoid of serrations.

Ragged Tooth sharks are born with spots that they gradually lose.

Ragged Tooth sharks can go through 30,000 teeth in a lifetime.

Ragged Tooth sharks come to Aliwal Shoal when the water is cooler to breed.

Ragged Tooth sharks refrain from eating while in Aliwal shoal.

Male Ragged Tooth shark bites the female’s pectoral fins and wraps himself around her, so many females carry scars of breeding.

Ragged Tooth sharks can actively pump water across their gills, allowing them to remain motionless within Aliwal Shoal’s caves.

Sand sharks are a member of the Ray family.

Sand sharks can reach up to 1.5 metres in size.

Blue spotted rays come to Aliwal Shoal to breed in the summer.

Butterfly rays are camouflaged in the sand and have a tiny venomous barb by their tail.

Manta rays are the largest species of ray with wingspans of up to 7 metres across and weighing up to 2000 kilograms.

Remora fish can attach themselves to manta rays for transportation.


Mantis Shrimp have front claws that have the equivalent force of a .22 calibre rifle.

Leaf or paper fish look like a piece of seaweed blowing around in the current.

Scorpion fish can change its colour according to its surroundings.

Lion or firefish use ornate, poisonous fins to herd and confuse tiny fish.

Lionfish have chemoreceptors, or spines in place of pectoral fins. Lionfish use this to dig through the sand and can use them like taste buds.

Cuttlefish can change colours at will.

Goatfish have chemoreceptors on their chin.

Most sharks must swim or lie in a current to provide a flow of seawater to their gills so they can breathe.

Millions of sardines follow the cold water up the eastern seaboard.

Plankton and krill thrive in the cold waters of Aliwal Shoal.

Predators follow the Sardine Run, where sardines gather in a giant ball, attacked from below by dolphins and sharks and from above by Cape gannets.

Bottlenose dolphins live in complex family units, often moving with mother and baby in front of the males.

Daga salmon can reach up to two metres in length, twice the length of river salmon.

Daga salmon arrive in the winter.

Brindle Bass can reach a length of two metres.

Potato Bass’s spots can be faded in and out to match its surroundings.

Moray eels have large teeth designed to tear flesh and a second set of jaws in their throats called pharyngeal jaws.

Moray eels are the only known animals that used their second set of jaws to actively capture and restrain prey.

Crayfish are preyed upon by octopi.

Colour change is a vital form of communication for octopi.

There are cleaning stations in Aliwal Shoal, where fish can go to have parasites removed from their body by cleaner shrimp, wrasses, and gobies.

Clams are fixed to the shoal.

Clams cast their sperm and eggs out into the open water.
ADVERTISEMENT