HOW MUCH IS A WHALE WORTH? 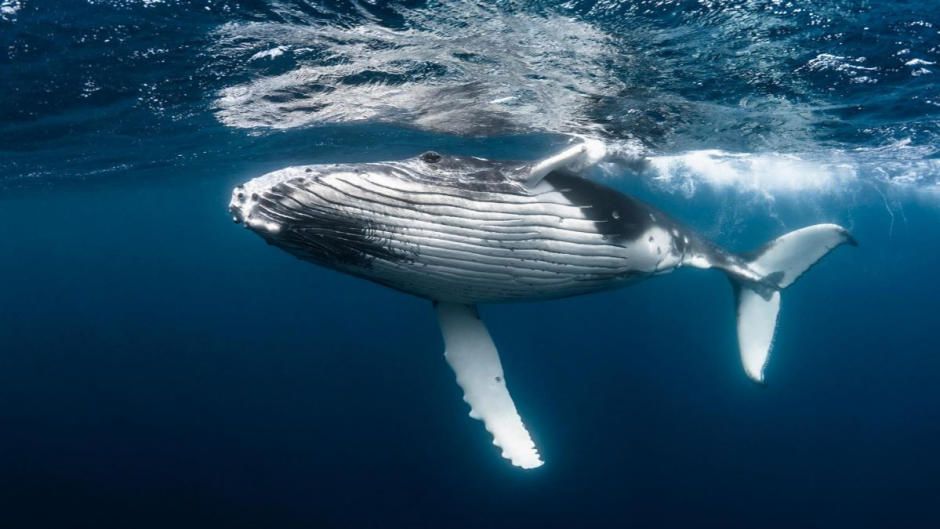 This young humpback whale is worth millions of dollars over its lifetime, just in its ability to capture carbon and sink it to the ocean floor after its death.

The benefits provided by great whales, including capturing carbon, make a powerful case for protecting them, according to economists.

The world’s largest whales are more than mere evolutionary marvels. By sequestering carbon in the ocean, they can help humanity fight climate change—an ecosystem service that may be worth millions of dollars per whale, according to a new analysis by economists with the International Monetary Fund (IMF).

Protecting large, charismatic animals like whales is often seen as a sort of charity work individuals and governments do on behalf of nature. A team of economists led by Ralph Chami, an assistant director of the IMF’s Institute for Capacity Development, wanted to change the way we think about whales by quantifying the benefit they provide us in dollars and cents. Their new analysis, detailed in a recent article in the trade publication Finance & Development, is a first-of-its-kind attempt to do just that.

The analysis hasn’t yet been published in a peer-reviewed scientific paper, and there are still important scientific knowledge gaps in terms of how much carbon whales can capture. But based on the research that’s been done so far, it’s clear to the economists that if we protect great whales, it will reap major dividends for the planet.

Chami hopes this finding will “start a conversation with the policymakers who don’t buy into saving animals for the sake of animals.”

“We have to agree whales are an international public good,” he says.

Great whales, including the filter feeding baleen and sperm whales, help sequester carbon in a few ways. They hoard it in their fat and protein-rich bodies, stockpiling tons of carbon apiece like giant, swimming trees. When a whale dies and its carcass descends to the bottom of the sea, that stored carbon is taken out of the atmospheric cycle for hundreds to thousands of years, a literal carbon sink.

A study published in 2010 estimated that eight types of baleen whales, including blue, humpback, and minke whales, collectively shuttle nearly 30,000 tons of carbon into the deep sea each year as their carcasses sink. If great whale populations rebounded to their pre-commercial whaling size, the authors estimate this carbon sink would increase by 160,000 tons a year.

While they are alive, whales might do even more to capture carbon, thanks to their jumbo-sized excrement. Great whales feed on tiny marine organisms like plankton and krill in the ocean’s depths before surfacing to breathe, poop and pee—and the latter activities release enormous plume of nutrients, including nitrogen, phosphorus, and iron, into the water. So-called poo-namis stimulate the growth of phytoplankton, marine algae that pull carbon out of the air via photosynthesis.

When phytoplankton die, much of their carbon gets recycled at the ocean’s surface. But some dead phytoplankton inevitably sink, sending more captured carbon to the bottom of the sea. Another study from 2010 found that the 12,000 sperm whales in the Southern Ocean draw 200,000 tons of carbon out of the atmosphere each year by stimulating phytoplankton growth and death through their iron-rich defecations.

Exactly how much whale poop boosts phytoplankton on a global scale isn’t known, according to Joe Roman, a conservation biologist at the University of Vermont who’s been studying the phenomenon for years. That’s why the economists took what Chami describes as an “if, then” approach, asking how much carbon could be captured, hypothetically, if the world’s current population of great whales enhanced marine phytoplankton by about 1 percent globally. To this, they added a literature-based estimate of how much carbon dioxide whales sequester when they die: about 33 tons per carcass, on average.

Using the current market price of carbon dioxide, the economists then worked out the total monetary value of this marine mammalian carbon capture, and added it to other economic benefits great whales provide through things like ecotourism.

Altogether, Chami and his colleagues estimated that each of these gentle giants is worth about $2 million over its lifetime. The entire global population of great whales? Possibly a one trillion dollar asset to humanity.

(Learn about the new science of whale culture on NatGeo's "Overheard" podcast.)

Not a silver bullet, but a new mindset

There are about 1.3 million great whales in Earth’s oceans today. If we could restore them to their pre-commercial whaling numbers—estimated at between 4 and 5 million— the economists’ calculations show that great whales could capture about 1.7 billion tons of carbon dioxide each year. That’s more than the annual carbon emissions of Brazil.

However, it’s only a few percent of the 40 billion tons of carbon dioxide humanity spews into the air each year. And even with aggressive global conservation efforts, it could be decades before great whales rebound to their pre-whaling numbers, assuming that’s possible at all given how much we’ve degraded the oceans.

“We don’t want to oversell the concept,” said Steven Lutz, the Blue Carbon Program Leader at GRID-Arendal, a Norweigan foundation that works with the United Nations Environment Program. “It’s not like we save the whales and we save the climate.”

To Lutz, the exact numbers presented in the new analysis are less significant than the framework it introduces for thinking about wild animals in terms of their value when kept alive. He’d like to see this sort of approach applied to carbon-rich marine ecosystems like seagrass beds, and to other groups of marine organisms, like fish.

“We see whale carbon as potentially the tip of the iceberg as far as marine carbon goes,” Lutz says.

Perhaps a financial benefits approach could be extended to land-based animals. For instance, a recent study in Nature Geoscience estimated that forest elephants in the Congo Basin help their rainforest homes sequester billions of tons of carbon.

Fabio Berzaghi, a researcher at the Laboratory of Climate and Environment Sciences in France and lead author on that study, said the IMF analysis raises an “extremely important” point about large animals: that their ecosystem services “benefit everybody.”

“I think it’s a very good first step to recognize they do provide services and these services are worth something,” Berzaghi said. “Potentially, a lot of money.”
ADVERTISEMENT
You need to install or update your flash player.