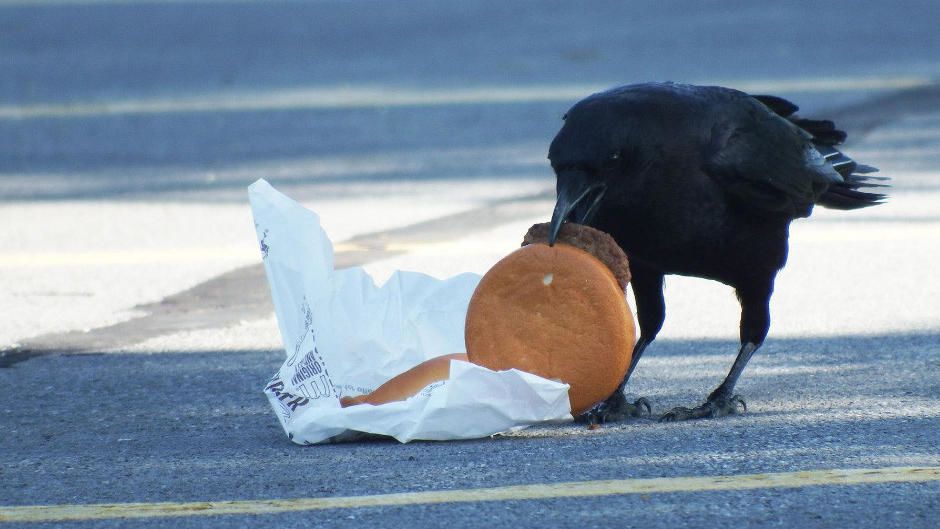 
But it’s not clear that eating ‘people food’ is necessarily bad for urban birds.

AS A CHILD, Andrea Townsend loved feeding her backyard sparrows and chickadees, but she wondered if it was good for them.

Townsend is now an ornithologist at Hamilton College in Clinton, New York, and she still cares about what birds are eating. Usually she gives them natural treats like unsalted peanuts, but for research purposes she tried a popular human food: cheeseburgers.

In a study published today in the journal The Condor, Townsend and her team show how urban living affects the health of American crows, including their cholesterol, and what happened to a rural population when burgers became part of their diet.

Crows Can Has Cheezburger?

Like other successful urban wildlife, crows survive in part by eating our food. Often that means eating whatever they find in our trash, including processed foods not found in nature. (Learn why crows are among the smartest birds.)

Previous studies had found that wildlife in urban or heavily touristed areas, like house sparrows and rock iguanas, respectively, had elevated cholesterol levels.

Townsend set out to learn whether urbanized crows also had higher cholesterol levels than their rural cousins.

First the team tested 140 crow nestlings in Davis, California, along a gradient that went from urban to rural over a span of three years. Indeed, the more urban the bird, the higher its cholesterol.

Next they supplemented the diet of a crow population in rural Clinton, New York, with a high-cholesterol human food, cheeseburgers, calling in orders of 100 McDonald’s cheeseburgers at a time.

“They thought we were joking,” Townsend says.

The Clinton area crows gobbled up the three burgers a day that researchers put under nesting trees, with some adults delivering burgers to the nestlings and some eating or storing the food for themselves.

Comparing the cholesterol and survival rates of the burger-eating crows with those of nearby crows who were weren’t supplemented with fast food, the team found that cholesterol levels did not have a detectable effect on the birds’ survival.

However, regardless of their cholesterol levels, urban birds did have lower survival rates than rural birds. It's unknown why urban birds didn’t fare as well, though many factors such as car collisions, disease, predators and poor food quality at critical developmental stages may come into play.

The nestlings who were about to fledge from the nest with higher cholesterol after eating the burger-rich diet actually had better body condition than their country cousins. Body condition in a scientific sense, though, just means that the birds weighed more for their size.

“If you’re a chubby crow, essentially, that’s considered to be good condition,” Townsend says, noting that this definition can be the subject of debate.

In small doses, cholesterol is a good thing, Townsend notes. It’s essential to body function and is a part of cells’ structure, acting as a precursor for hormones and a component of bile, which breaks down fat, she says. It’s in excess that it’s associated with disease.

For humans, it’s later in life that high cholesterol comes home to roost, so to speak, in the form of heart disease. Crows, “which can live more than 15 years in the wild, might develop disease later in life,” but this needs further research, Townsend says.

Kaeli Swift says she’s glad not to have to cringe every time she sees a crow dumpster diving. Swift is a post-doctoral researcher at the University of Washington who has spent years observing crows’ behavior. (Related: Do Crows Hold Funerals for their Dead?)

Swift, who wasn’t involved in the study, says the researchers did a great job of showing that the abundance of “people food” in urban landscapes is not doing crows harm, at least not in the short term.

Not that cheeseburgers should be their steady diet—if you feed backyard crows, giving them something as natural as you can get is the preferable thing, says Townsend, who doesn’t want to discourage feeding birds.

“I think the culture is already there of ‘don’t give wildlife junk food,” Swift adds.

This study, she says, gives us a deeper appreciation for our effects on the animals that we share spaces with. Crows and other city-dwellers are the animals “that are thriving with us and attracted to us,” she says, and it’s important to know how they fare with what we share.
ADVERTISEMENT
You need to install or update your flash player.