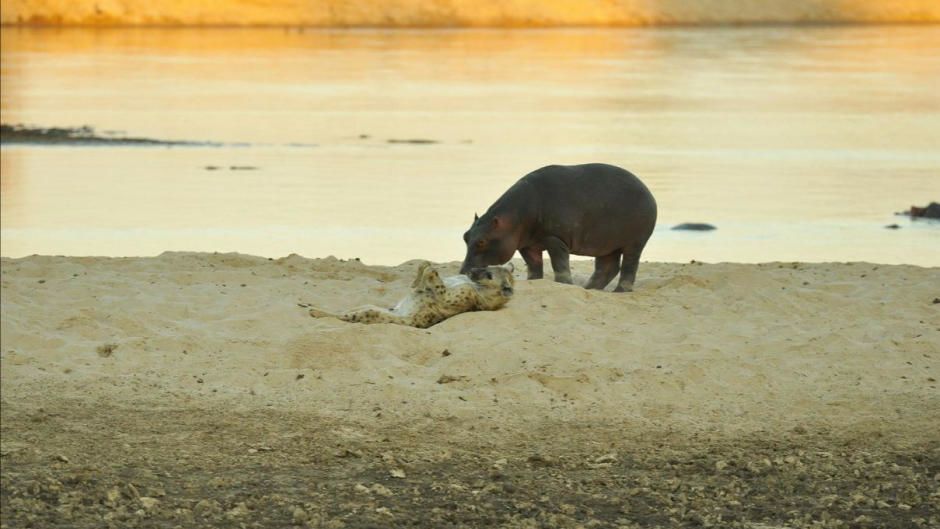 A spotted hyena rolls onto his back next to a hippo on the banks of the Luangwa River in July.

It was a typical game drive for Patrick Njobvu in Zambia’s South Luangwa National Park—until he witnessed something unique in his 23 years of guiding.

As he and a vehicle of tourists watched on a recent July morning, a hippopotamus emerged from the Luangwa River and approached a sleeping spotted hyena, which soon awakened.

“The hyena didn't run and both started sniffing each other, nose to nose, almost like kissing,” Njobvu, the head guide at Shenton Safaris, told National Geographic by email. For almost 20 minutes, the young animals hung out together, touching noses, with the hyena rolling on its back at one point. “It was very strange indeed,” he says.

Njobvu later described the incident on the safari’s blog as a “hyena-hippo love affair”, but experts say it was instead likely a case of youthful curiosity. (Watch a leopard and a hyena share a rare meal together.)

“If I was to guess, I’d say that the young hippo was simply inquisitive about the hyena, who in turn wasn’t feeling threatened enough to leave because the hippo wasn’t being aggressive,” says Rob Heathcote, a behavioral ecologist at the University of Exeter in the U.K.

Young animals are inquisitive in part to help them test the boundaries and learn about unknown elements of their environments. “However, we can’t really say what this interaction is about, beyond speculating, since this kind of thing is too rare to study properly,” he cautions.

Arjun Dheer, who studies spotted hyenas in Tanzania’s Ngorongoro Crater, does not “doubt that there was some mutual curiosity,” but he adds that both animals were likely afraid of one another.

“The hyena's body language—ears back and head tilted—indicates a submissive or fear response,” notes Dheer, a Ph.D. student at the Leibniz Institute for Zoo and Wildlife Research in Germany. (See 14 incredible photos of African predators in action.)

Likewise, in one photograph of the incident, the hippo is yawning, which can be a threat display. “Hippos are territorial, and this one may not have been too pleased about the hyena being next to its waterhole,” Dheer says by email.

Hyenas may be Africa’s most successful predator, but hippos can also be very dangerous, and are responsible for many human deaths each year.

It’s also possible that the animals were playing, a phenomenon observed in a variety of species, from crocodiles to otters to dogs.

Gordon Burghardt, a biologist at the University of Tennessee at Knoxville, developed a scientific definition of play: “Repeated, pleasurable behavior done for its own sake that's similar, but not identical to, other behaviors in which the animal regularly engages. It also must be seen when the animal is healthy and not under stress.”

Yet “play behavior is really understudied, and we still have very little idea about what its actual function is,” Heathcote says.

One point Dheer is quite sure on is that neither of these species actually kiss. “It's always tempting to anthropomorphize animals, but I don't see this as much of a love affair,” he says.

Just don’t tell that to this leopard and buffalo.
ADVERTISEMENT
You need to install or update your flash player.