NEAR THE AMAZON FIRES, RESIDENTS ARE SICK, WORRIED, AND ANGRY 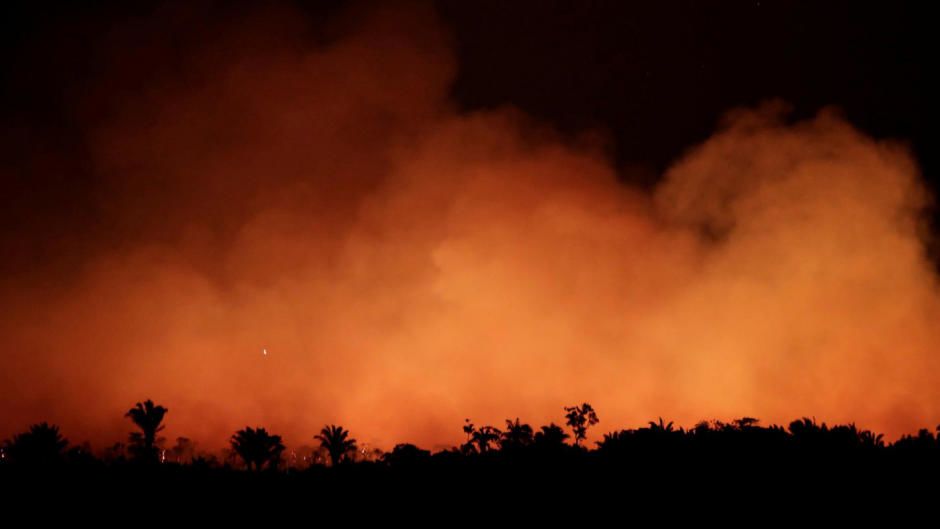 
In Porto Velho, capital of a Brazilian state ravaged by recent fires, residents are on edge and falling ill from the pervasive smoke.

AMAZON WILDFIRES 'SO MUCH WORSE THAN BEFORE,' SAY LOCALS
A hymn describes the sky in Porto Velho, Brazil, as forever blue, but not anymore: Now it's gray with smoke from the fires burning in the Amazon.

PORTO VELHO, BRAZIL-A popular hymn describes the sky above this Brazilian city of more than 400,000 people as forever blue. But this week, Porto Velho, along with much of the Amazon basin, has been shrouded in gray smoke as forest fires continue to rage across the region.

Although as a rainforest the Amazon historically has not burned on its own, deforestation over time has made the ecosystem drier, and fires have become common this time of year, which is normally marked by dry and cooler weather. Many fires are set by ranchers and farmers seeking to clear land for cattle grazing and agriculture. This year, however, satellite data from Brazil’s National Institute for Space Research (INPE) has shown an increase of almost 85 percent in fires across the country from 2018, mostly in the Amazon region.

The situation is particularly acute in northwestern Rondônia state, of which Porto Velho is the capital. Here, fires are up 190 percent from last year, INPE reports, despite weather conditions being roughly the same. The state is known as cattle country and is among the most deforested in Brazil. This year, ranchers appear to have set far more fires than in previous years and as a result, large swaths of the state have been burning, seemingly out of control.

Smoke everywhere
Earlier this week, Porto Velho’s airport had to be closed as the fire raged right up against its perimeter, barely skirting a fuel depot. Charred palm trees now greet visitors on their arrival. In the city, the smoke is noticeable even deep within a large shopping mall and inside sealed hotel rooms. The number of people admitted to state hospitals with pneumonia, severe coughing and other respiratory illnesses has tripled in the last week, according to local news reports.

On Friday morning, life on the streets here appeared normal; people took no precautions to shield themselves from the smoke. At a fruit stand along the busy Imigrantes Street, Laine Polinaria de Oliveira catered to a steady stream of customers stopping to buy pineapples, papaya, watermelon, and guayaba, the Brazilian version of guava.

“Business is normal, but everyone is talking about the fires,” she says. “We are used to fires during this time of year, but this year is so much worse than before.”

Hailing from Nova Mamoré, a small town 186 miles away, where the fires are even more intense than around Porto Velho, de Oliveira says she is particularly worried about her nine-year-old son inhaling the dirty air.

Shipping route aflame
Situated not far from the Bolivian border, along the Madeira River, a 2,000-mile-long tributary of the Amazon, Porto Velho is a major shipping hub in the northwestern part of the Brazilian Amazon. Smoke from the fires had led to poor visibility for boat operators on the river, elevating the risk of them crashing into other boats or running aground on exposed sand banks.

Jerrison da Silva Cruz, a local boat driver and fisherman, recounted a harrowing incident on Wednesday evening as he and a crew on board a ship traveling upstream ran into a wall of fire at a major bend in the river about 12 hours from Porto Velho.

“We could not see anything because of the smoke,” he says. The captain of the ship decided that the best course of action was to stay in the same spot, alongside land that had been set on fire to make room for watermelon farms, and let the smoke clear, which it eventually did.

While the wide Madeira River may act as a barrier against the fires, the small roads that crisscross the vast Amazonian forests provide little protection for people traveling by car.

“Nobody knows what’s going on with them … they have no firemen to call to go there and put out the fire,” says Ivaneide Bandeira Cardoso, the well-known founder of Kanindé, a Porto Velho-based advocacy group for indigenous communities.

Cardoso and many others say Brazilian President Jair Bolsonaro is directly responsible for the escalation of forest fires throughout the Amazon basin this year. Since taking power at the beginning of the year, Bolsonaro has made it clear he prioritizes the interests of industries that want greater access to protected lands. His critics say he has emboldened ranchers and farmers to burn even more land by cutting back on law enforcement and signaling that his government will not impose fines for illegal land-grabbing.

“What causes this tragedy are the words of the president,” says Cardoso, adding that while the greatest victims of the fires are indigenous people and nature, it is a “tragedy that affects all of humanity,” since the Amazon plays such an important role in the global ecosystem as a carbon sink to stem the effects of climate change.

Bolsonaro for his part has dismissed the criticism of his government’s actions in the Amazon as hysterical. Without offering any evidence, he has even suggested that foreign NGOs have deliberately set fires to “bring about problems for Brazil.”

While Bolsonaro retains strong support among his conservative base, many Brazilians appear increasingly concerned that the government’s actions will hurt Brazil’s reputation internationally and could eventually lead to economic hardship if other countries decide to boycott Brazilian products, including beef. Protests against the government’s policies on the Amazon are reportedly scheduled in many cities in Brazil over the next three days.

At the fruit stand in Porto Velho, de Oliveira says attitudes regarding the deliberate setting of forest fires could be changing among ordinary people. “This is something that people have been doing for many years,” she says. “But now we can really feel the repercussions of this practice and people are changing their opinions on this.”

Residents here don’t appear to let the smoky air stop them from going about their normal lives. On Thursday night, a young crowd at an outside bar attached to the main shopping mall in Porto Velho sang along loudly to a live band as the smoke whirled around the street lights. The title of the song? “Everybody will suffer.”
ADVERTISEMENT
You need to install or update your flash player.