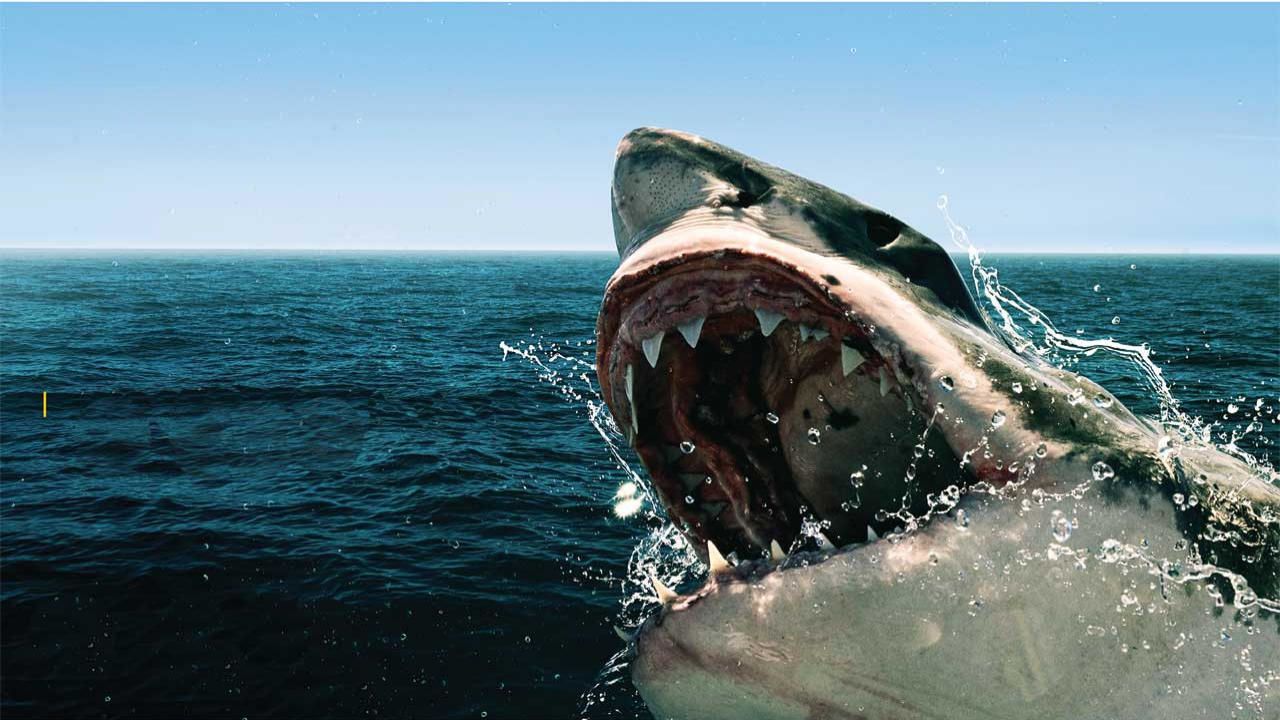 Nat Geo's SharkFest is back this summer with more teeth than ever!

This year we’ve teamed up with top shark enthusiasts, experts and filmmakers to bring you our biggest, best and most eye-opening shark shows yet – this is the definitive destination for all things shark, so dive in…Nat Geo WILD delivers a month of shark-infested programming. SHARKFEST takes you up close and personal with one of nature's most feared - and often misunderstood - predators. The frenzy of SHARKFEST programming is sure to captivate viewers with the truth that is stranger than fiction, from the latest insights from the top shark researchers, a comprehensive look at the many shark species in all their glory and our top shark shows.

">World’s Biggest Tiger Shark (aka: Jaws Lagoon) A mysterious location off the coast of Tahiti that is chock full of sharks: hammerheads, oceanic black tips, grey sharks and something much bigger lurking in the shadows. Enormous and ferocious tiger sharks congregate here and then, once a month, this mystery deepens. Each new moon, the tigers vanish. One scientist tracks them to Jaws lagoon and gets the shock of her life. Premieres Sunday July 19th at 9pm

Sharks vs Dolphins: Blood Battle Sharks and Dolphins have shared the ocean for millennia, but that doesn’t mean they’ve shared it in peace. Hidden beneath the waves, the hostile relationship between sharks and dolphins finally comes to light. Who really rules the seas? Premieres Monday July 20th at 10pm

Sharkcano Across the world volcanoes have become hot spots for sharks. In some places this attraction has become a problem. On Reunion Island, an idyllic volcanic island in the Indian Ocean, shark attacks are a nightmare, with nine people killed the last seven years by sharks. Could the volcano hold some key to understanding these attacks? Premieres Tuesday July 21st at 10pm

Secrets of the Bullshark (aka That’s Bullshark!) The Bullshark has been always in the top bracket for deadliest man-eaters and is now getting the spotlight it deserves. Learn everything you need to know about Bull Shark biology and behavior, and why this beast is more than it seems. The Bull Shark is a machine of a predator. It can survive in salt water, and in rivers and freshwater lakes. This ability, unique among deadly sharks, means the Bull Shark can get you where other sharks cannot –and that has led to a

new theory. There is a sneaking suspicion that other sharks might have been stealing the Bull Shark’s thunder. How many shark attacks attributed to other man-eaters were actually the Bull Shark? We’ll look into new evidence to reveal the answer. Premieres Wednesday July 22nd at 10pm

Most Wanted Sharks Big teeth, powerful bodies - These sharks are so outstanding they've become worldwide celebrities with their own fans and followers. Whether it's exploring in the Bahamas waters with the most photographed shark in history or coming face-to-face with the shark so large he's been known to eat fellow great whites for dinner, we're diving into the stories of the biggest shark stars of all-time. Premieres Thursday July 22nd at 10pm

World’s Biggest Great White? (aka Deep Blue) Three experienced divers and photographers set out on a small boat to try to record any marine life around the carcass of a sperm whale floating off the coast of Oahu. What they experienced is one of the most incredible great white shark encounters ever caught on camera. Premieres Friday July 23rd at 10pm

Raging Bullshark For years, the smaller, unremarkable-looking bull shark has come in third behind the great white and tiger sharks when it comes to deadly attacks on humans. But as climate change warms the world’s waters, and its territory begins to spread, the bull shark enters the ring to prove its worth and leave with the title of the world’s most dangerous shark. Premieres Sunday July 26th  at 9pm

Shark vs Whale A normal day turns deadly when Ryan Johnson, a marine biologist based in South Africa, witnesses an unprecedented predatory event. He captures footage of a humpback whale being attacked and strategically drowned by a Great White Shark. For Johnson, this is a total perspective shift on a creature that he has spent his life studying and spawns an investigation of what could have possibly led to this attack! Premieres Tuesday July 28th at 10pm

What the Shark? Great White, Tiger, and Bull sharks may dominate news headlines and our primal fears, but there is another cast of monsters waiting in the dark folds of the ocean. They're hidden objects of nightmares, except they're so fascinating that you may forget your phobias. Premieres Wednesday July 29th at 10pm

Sharks vs Surfers With shark attacks on the rise worldwide surfers are taking the brunt of the bites. To understand why, this special relives the most harrowing of shark vs surfer stories from the world's deadliest shark infested surf beaches. Using unbelievable, caught on camera, encounters and interviews from the victims themselves, we answer the question, once and for all: Are we really in danger? Premieres Sunday Aug 2nd at 9pm

When Sharks Attack Season 6 (6x60) From America's coastline to exotic beaches around the world, shark attacks are turning dream vacations into nightmares. Many of these attacks occur suddenly, in large numbers, and in unexpected locations - puzzling locals and scientists alike. These mysterious incidents are investigated to discover what’s affecting some of nature's most feared fish. Premieres Monday July 20th at 9pm (each weeknight until Monday, July 27th)