LESS THAN 3 PERCENT OF THE OCEAN IS 'HIGHLY PROTECTED' 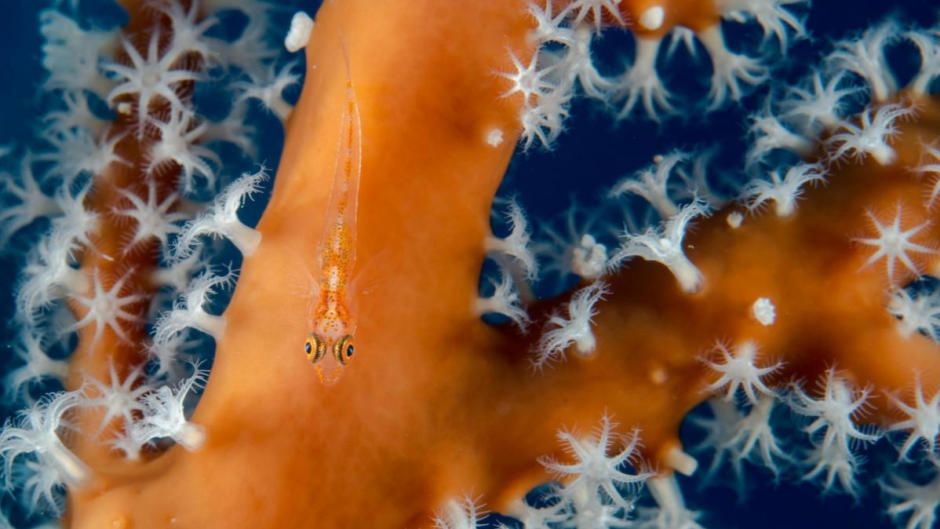 Despite a flurry of declarations about marine protected areas, world leaders are struggling to put these vital conservation measures into practice.

A broad array of species live in Palau's abundant protected waters, including this little goby camouflaged within the branches of a red coral.

Countries earn a lot of media buzz for announcing bold plans to section off thousands of square miles of ocean for protection. That’s because scientists say these Marine Protected Areas (MPAs) are effective tools to protect the marine plants and animals facing threats from ocean acidification, heatwaves, overfishing, and pollution.

MPAs can provide benefits like protecting endangered species or helping replenish fish stocks that spill into neighboring fisheries. The most highly regulated parks have the most benefits. And according to a report released on Wednesday by the UN's Intergovernmental Panel on Climate Change (IPCC), unabated emissions will have severe impacts on biodiversity.

But for MPAs to actually reach the level of protection needed to mitigate those impacts of climate change, experts say the UN will have to think much more critically about how they regulate those areas and what will happen to countries that fail to deliver on their promises. If a park remains in limbo for too long—stuck between declaration and implementation—it may be referred to as a “paper park” by conservation groups but will still face little international pushback.

“There are two ways to look at paper parks,” says Russel Moffitt, a program manager for the Atlas of Marine Protection who tracks marine park progress. He says the term can refer to parks that are only designated on paper: “That’s usually a process issue or governance issue.”

Paper parks also can spring from “regulations that are so weak, [where] there’s such a lack of enforcement or community involvement that even though there’s a marine reserve, there’s no objective met.”

A study published last year in the journal Science found that industrial fishing was present in 432 of the 727 MPAs in the European Union.

MPAs are often created in ecologically rich waters where the strict regulations can protect the most life. That can often set up a contentious dynamic between those who want to protect fish and those who want access to them.

“I’m not critical of anybody who’s gone through the hard step of delineating an area to be protected,” says Rand. “They’ve really gone through one of the hardest elements [announcing] that extraction at some level will not be allowed.”

Rand points to the National Park Service maintenance backlog as an example of the large amount of resources and staff needed to ensure a nature reserve is protected.

“The first is just to have a common understanding of what an MPA is and what it can do,” she says.

With former National Oceanic and Atmospheric Administration administrator and current Oregon State University professor Jane Lubchenco, Grorud-Colvert is working on a set of guidelines to clearly define levels of MPAs.

“There’s also an issue of resources and means. You need resources, staff, and equipment,” says Nicolas Fournier, policy and advocacy manager for Oceana, based in Brussels. “That’s a reality that a lot of governments are facing. Sometimes they don’t have the budgets to simply implement them.”

In a TED talk he gave last year, National Geographic Explorer Enric Sala advocated for turning the high seas into a marine reserve. Because the high seas sit outside of any national waters, they require a massive international agreement.

“Most of the world is unaware that the equivalent of a climate agreement for the oceans is being negotiated right now,” says Rand.

A treaty to protect the high seas, an area that covers two-thirds of the ocean, will next be negotiated in early 2020, but it’s yet unclear how strong those protections might be.

Rand is optimistic that improvements in satellite technology can be used to more effectively monitor MPAs at a lower cost. Global Fishing Watch pairs satellite monitoring with artificial intelligence, and it has been used to identify spots where illegal fishing runs rampant.

Rand also points to energized youth movements and the current spotlight on climate change as sources for having more optimism about protecting more of the world’s oceans.

Sala notes the U.K., Chile, the Seychelles, and Palau are examples of countries that have taken the kind of bold action needed to protect the ocean.

“Countries need to step up and protect more critical ocean areas to help us avert a mass extinction, produce seafood into the future, and mitigate climate change,” Sala says via email. “The ocean is a victim of climate change, but can also be a solution.”
ADVERTISEMENT
You need to install or update your flash player.