WHAT THE AMAZON FIRES MEAN FOR WILD ANIMALS 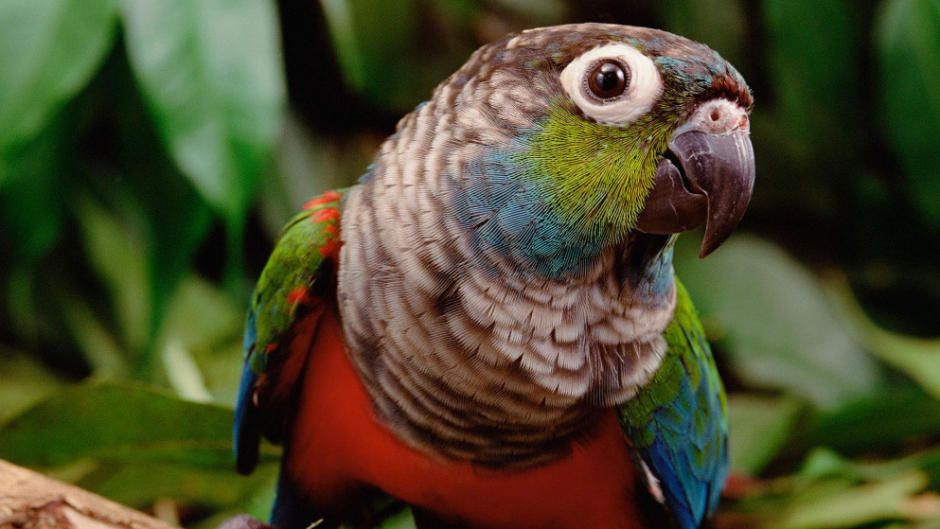 Crimson-bellied parakeets are one of 1,500 bird species found in the Amazon rainforest. As fires rage at an unprecedented scale, the implications for wildlife could be severe.

“In the Amazon, nothing is adapted to fire.” 10 percent of Earth’s animal species live there.

The Amazon rainforest—home to one in 10 species on Earth—is on fire. As of last week, 9,000 wildfires were raging simultaneously across the vast rainforest of Brazil and spreading into Bolivia, Paraguay, and Peru. The blazes, largely set intentionally to clear land for cattle ranching, farming, and logging, have been exacerbated by the dry season. They’re now burning in massive numbers, an 80 percent increase over this time last year, according to Brazil’s National Institute for Space Research (INPE). The fires can even be seen from space.

For the thousands of mammal, reptile, amphibian, and bird species that live in the Amazon, the wildfires’ impact will come in two phases: one immediate, one long-term.

“In the Amazon, nothing is adapted to fire,” says William Magnusson, a researcher specializing in biodiversity monitoring at the National Institute of Amazonian Research (INPA) in Manaus, Brazil.

In some forests, including many across the U.S., wildfires are essential for maintaining healthy ecosystems. Animals are adapted to cope with it; many even rely on it to thrive. The black-bellied woodpecker, for example, native to the American West, only nests in burnt-out trees and eats the beetles that infest burned wood.

But the Amazon is different.

The rainforest is so uniquely rich and diverse precisely because it doesn’t really burn, says Magnusson. While fires do sometimes happen naturally, they’re typically small in scale and burn low to the ground. And they’re quickly put out by rain.

“Basically, the Amazon hadn’t burnt in hundreds of thousands or millions of years,” says Magnusson. It’s not like in Australia, for instance, where eucalyptus would die out without regular fires, he says. A growing number of manmade fires have plagued the Amazon in recent years, imperiling the ecosystem. The rainforest is not built for fire.

How are the fires affecting individual animals right now?
It’s likely they’re taking a “massive toll on wildlife in the short term,” says Mazeika Sullivan, associate professor at Ohio State University’s School of Environment and Natural Resources, who has done fieldwork in the Colombian Amazon.

Generally, in the midst of wildfire, Sullivan says, animals have very few choices. They can try to hide by burrowing or going into water, he says. They can be displaced. Or they can perish. In this situation, a lot of animals will die, from flames, heat from the flames, or smoke inhalation, Sullivan says “You’ll have immediate winners and immediate losers,” says Sullivan. “In a system that isn’t adapted to fire, you’ll have a lot more losers than you will in other landscapes.”

Are some animals likely to do better than others?
Certain traits may be beneficial in the midst of wildfire. Being naturally mobile helps. Large, fast-moving animals like jaguars and pumas, Sullivan says, may be able to escape, as may some birds. But slow-moving animals like sloths and anteaters, as well as smaller creatures like frogs and lizards, may die, unable to move out of the fire’s path quickly enough. “Escape into the canopy but choose the wrong tree,” Sullivan says, and an animal is likely to die.

Could some already-vulnerable species become more threatened or even extinct?
It’s tough to say. Wildfire in the Amazon is completely different than in the U.S., Europe, or Australia, where we know a lot about species distributions, says Magnusson. We don’t know enough about the range of most of the animals in the rainforest to pinpoint which species are under threat.

Nevertheless, there are a few specific species of concern.

Milton’s titi, a monkey discovered in 2011, has only ever been documented in a part of Brazil in the southern Amazon that’s currently beset by fire. Another recently discovered monkey, the Mura’s saddleback tamarin, lives in a small range in central Brazil—also threatened by encroaching wildfire, says Carlos César Durigan, director of the Wildlife Conservation Society of Brazil. It’s possible these species are native to these specific regions, Durigan says. “I [fear] we may be losing many of these endemic species.”

What about aquatic animals?
Large bodies of water are mostly safe in the short term. But animals in small rivers or creeks—which are highly biologically diverse—could be in trouble. In smaller streams, “fires burn right over,” says Sullivan. Water-dwelling amphibians, which need to stay partially above water in order to breathe, would be in harm’s way. Fire could also change water chemistry to the point that it isn’t sustainable for life in the short term, Sullivan says.

How might the fires’ aftermath affect species?
This is the second major blow. “Longer-term effects are likely to be more catastrophic,” says Sullivan. The entire ecosystem of the burning sections of rainforest will be altered. For example, the dense canopy of the Amazon rainforest largely blocks sunlight from reaching the ground. Fire opens up the canopy at a stroke, bringing in light and fundamentally changing the energy flow of the entire ecosystem. This can have cascading effects on the entire food chain, Sullivan says.

Surviving in a fundamentally transformed ecosystem would be a struggle for many species. Lots of amphibians, for instance, have textured, camouflaged skin that resembles the bark or leaves of a tree, allowing them to blend in. “Now, all of a sudden, the frogs are forced to be on a different background,” says Sullivan. “They become exposed.”

And many animals in the Amazon are specialists—species have evolved and adapted to thrive in niche habitats. Toucans, for instance, eat fruits that other animals can’t access—their long beaks help them reach into otherwise inaccessible crevices. Wildfire decimating the fruit the birds depend upon would likely plunge the local toucan population into crisis. Spider monkeys live high in the canopy to avoid competition below. “What happens when you lose the canopy?” Sullivan asks. “They’re forced into other areas with more competition.”

The only “winners” in burned forest are likely to be raptors and other predators, Sullivan says, as cleared-out landscapes could make hunting easier.

Are there other consequences for wild animals?
Magnusson is most concerned about the overall repercussions of forest loss.

“Once you take the rainforest away, [you lose] 99 percent of all species,” he says. If these wildfires were a one-off, he wouldn’t necessarily be worried, he says, but he notes there’s been a fundamental change in policy in Brazil “that encourages deforestation.” He’s referring to Brazilian President Jair Bolsonaro’s commitment to open up the Amazon for business. “The political signal that’s gone out is basically that there’s no law anymore, so anybody can do what they want.”

Conservationists and concerned citizens have taken social media, and #PrayForAmazonas became Twitter’s top-trending hashtag on Wednesday. Many criticized the Bolsonaro government’s policies. Others expressed concern that the global demand for beef incentivizes the accelerated clearing of land for cattle ranching. Environmentalists are also calling attention to the consequences that a burning Amazon—often called the lungs of the planet—would have on climate change. By Thursday, #PrayForAmazonas had spurred momentum for a spin-off hashtag: #ActForAmazonas.

There’s an area along the southern border of the Amazon rainforest, in the Brazilian states of Pará, Mato Grosso, and Rondônia, called the “deforestation arc,” Magnusson says. There, wildfire is pushing the edge of the rainforest north, possibly changing the border forever.

“We know the least about it,” he says of this region. “We may lose species without ever knowing they were there.”
ADVERTISEMENT
You need to install or update your flash player.